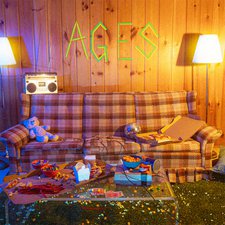 
Ages is the debut album from Minnesotan church-based worship collective River Valley AGES. If you're familiar with the big names in the worship/radio industry, you'll have an idea of what to expect here; see the Tauren Wells-ish "Honest," or the Hillsong Young & Free influenced "Just The Start." One standout characteristic of this group is that all the members seem to be under the age of twenty, and you can tell from their music videos and media content, that this is a group intent on introducing their non-believing peers to a vibrant relationship with God. While this intention is good-hearted, the execution just doesn't measure up to its lofty goal. I was honestly perplexed at the lack of up-tempo tracks, opting for the more slow-building worship ballads you're familiar with, which makes the album feel a whole lot longer than it is. I was even more taken aback that this collective of on-fire young adults, whose goal it is to inspire creativity and engagement, resulted in an album that is lacking much in the way of creativity and originality.

Opening with lead single "Nostalgia," we get a very heartfelt testimony to a musical backdrop of simple acoustic guitar and warm keyboards. Though I was expecting a high octane beginning, "Nostalgia" exudes a clever sort of comfort and softly eases you into the album. I'd say of all the songs on the album, this one best hits its intended target. The lyrics speak of how we are longing for God's steady presence in our lives to be just as palpable as when we first believed. The next track, "Sunrise," picks up the pace a bit, but I'm sure I've heard this exact groove and chord progression in a Coldplay song somewhere along the way. The concept is an interesting one, speaking of God's faithfulness being like the sunrise, but the tagline "I know You'll never leave" to me, doesn't make sense in relation to a sunrise, as eventually the sun does cease to rise! This brings up a qualm I'm having with the album at large; most of the songs open up an engaging topic, much like the aforementioned tracks, but ultimately the surrounding lyrics underwhelm in delivering the necessary depth to fully cover it. "Tightrope" would fall under this category, featuring smooth head-voice vocals and a fairly unique theme of how God calls us into places we don't expect, but doesn't delve much farther than that.

The track that comes closest to connecting all the dots is the Hillsong-esque "Beautiful (Hidden Worlds)," which uses word pictures to describe how nature points to its Creator, "As dawn reveals the rising sun/an image of your faithful love for me/the mountain peaks in majesty/pointing to the glory of my king." Unfortunately, the main chorus treads on already well-trodden ground, making the overall song play like a Hillsong rerun, "There is no one like you/none besides you Lordhow could I praise enough." The following track, "Know Your Love" is a peppy love song that blurs the line between God and a boyfriend/girlfriend in a way we've not only heard before, but makes the love of God primarily an emotional feeling, rather than a sacrificial action on God's part, "Cause all I want is You to take me deeper/so I will open up my heartIt's like I'm living the first time in a long time/didn't know I could feel this way/now that I know Your love."

"Ask Seek Pray" and "Desperate Heart" are both prayers for God to act while we give our hearts wholly to Him. It's a solid enough message, but without a strong distinctive, these can easily get lost in the shuffle of look-alike worship songs. The former has perhaps the best bridge on the album, but the main chorus line is repeated so often it quickly wears out its welcome. The latter falls into the above category of an interesting topic but shallow execution, "I wanna be set apart/give me a desperate heart/cause all I want is all You are." "Just The Start" closes the album on a dance-pop note, with a steady kick drum and quick vocals, but the lyrics are cheesy and underwhelming, "Hear the song in your heart/there's a heavenly melody ready in your soul/every heart synced with Jesus like never before."

The motive behind River Valley AGES is a good one, giving new artists a chance to write and play worship music, and it was interesting to hear each track seemingly feature a new lead singer. I just wish the final product showed more of the creativity for which they strived. The music is mostly bland and incredibly simple, and the songs don't travel anywhere different from where they start. The lyrics, though passionate, seem rehashed from the myriad of other worship songs in this genre. If the goal is to approach the writing process with creativity, then more chances should be taken, especially changing up parts within each song, keeping the listener on their toes and allowing the longer songs to hold interest. River Valley AGES' debut is one meaning well, but ultimately not achieving its goal.