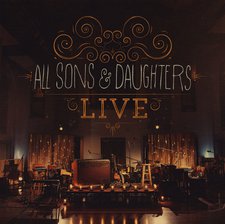 It hasn't even been two years since All Sons & Daughters debuted their unique take on modern worship music with their first EP, Brokenness Aside. Having a more southern and folk base to their music, All Sons & Daughters largely create worship music for those who don't really like the stereotypical sound of most of today's worship music. Even in the vocal department, where most listeners are content with a standard vanilla flavoring, the pairing of vocalists David Leonard and Leslie Jordan create a velvety rich sorbet in comparison, bringing a satisfaction to the palette that few artists in the genre seem to offer. All of the duo's recordings up until this point have been studio projects, so Live is the band's first venture into live recordings -- and it is a grand one.

While many worship leaders aim to tickle the emotions of their audiences with tired and often unimaginative rhythms and lyrics, AS&D focus a lot on themes of brokenness, our sinfulness and His faithfulness to restore. And it's in this restoration and reveling in His grace that joy comes bubbling up. Live opens with "Brokenness Aside," a quiet, worshipful lament that immediately ponders, "Will Your grace run out if I let you down? All I know is how to run. Cuz I am a sinner, if it's not one thing, it's another. Caught up in words, tangled in lies. But You are a Savior and You take brokenness aside and make it beautiful." Instead of the usual soaring anthem with howling audiences and boisterous clapping, Live drifts in, preparing the worshipper's heart to approach the Lord's throne with a humble heart. Some worship music fans will probably be put off by such an lead-off track, but it's a wonderfully open and intimate way to start things. Let's face it, it's common for many people to find worshipping through the tougher seasons in life a difficult thing to do. But considering how we were born to worship our Creator, we're expected to do it through the ups and the downs. The fact that AS&D don't sugarcoat the worship experience help get our hearts right while listening to Live. The way that Live's tracks are ordered really does give the ready listener a reason to sing.

"Hear The Sound" follows the somber opener with a folksy styling that already starts to pick up the musical mood a bit as Leonard leads off, "God of mercy, full of grace, You are forever, always forever. Slow to anger, rich in love, You are forever, always forever." At this point, we're already reflecting on the goodness and redemption of God's grace after confessing our frailty in the first track. "Oh How I Need You" finds Leonard and Jordan harmonizing beautifully as the upbeat southern folk rock sound starts to escalate. If you weren't in the mood to worship before the album started, chances are you'll be much more inclined to raise your voice Heavenward at this point. This track is also an excellent example of AS&D's masterful approach to the album's format. The recording itself is rich and crisp, with Jordan and Leonard's impressive vocals taking center stage and the audience serving as a backup choir at just the right moments. For some listeners of your typical live worship recording, there's a distinct "You just had to be there" feel of the mood and music. It can sound like you're listening in on a party you were never invited to, and the blissful exuberance displayed through the songs can be difficult to feel a part of.

In fact, it's easy to keep forgetting that Live is a live recording while listening to it, until some rare audience applause follows a song or the vocalists insert an adlib of prayer or praise. Only a handful of songs feature applause at the end (with none of the songs opening with such cheering), including "Oh How I Need You," "Oh Our Lord" (complete with obnoxious whistling from an audience member), and "Your Glory/Nothing But The Blood" (the raucous whistles briefly reappear here), which closes the album but fades out the applause quickly in a way that sets up Live to be listened to all over again from the start almost seamlessly. Having most songs end without the audience ups the replay value tremendously. And the fact that the recording is up-close-and-personal with the audience sounding more like a mass group of BGVs than merely proclaiming their reactions, helps the album pull you in slowly. I can imagine that a song like "Oh Our Lord" or "All The Poor And Powerless" is a good glimpse of what praising Jesus in Heaven might be like for us someday.

By the time the generous 13-track album wraps, it's a truly refreshing listen that is a gift that keeps on giving. The highlights are many on this album, too, from the opening track and "Hear The Sound" on down to "Oh How I Need You," "Great Are You Lord," "Wake Up," "Called Me Higher" and the incredible "All The Poor And Powerless." Now, the Live experience is not just available as audio, but can be purchased in a CD/DVD format as well. Video wasn't available to us at the time of review, but this is one of the few live albums where I never felt like I needed to see video for the audio, which I feel says a lot about the audio experience. But for those who want to snag the music from iTunes, there's an iTunes LP option that gives you the full 13 tracks of audio as well as five of the live videos. The full video portion will be released to iTunes as the exclusive place to get it in HD, while the CD/DVD combo will only be in standard definition. I have seen some teasers of the video for this project, however, and it looks just as exquisitely produced as the audio is.

I don't take it lightly in saying this, but I feel I can truly say that this is the best live worship album I've heard in many years. It's an album for not only worshippers, but for music lovers who want something different to listen and worship along to than the norm. If you've grown tired of the same old, same old in the world of modern worship music, All Sons & Daughters present a gorgeous outing in Live. This talented duo continue to turn out excellent pieces of artful worship and this latest venture is their best yet.

The live album is a beast not too easily tamed. For many artists, the live album is intended for a healthy fan base. However, there is the rare case of hearing an album that not only is equal with studio recordings but surpasses it by leaps and bounds. In the case of All Sons and Daughters Live - this album is their best yet.

Live is filled with songs well known by AS&D fans already, but they reach their full potential on this live recording. "All the Poor and Powerless" and "Brokenness Aside" are elevated with the sweet musings of the audience. Honestly, the crowd sounds so good that you would think they were a professional choir. One amazing stand out track is "Oh How I Need You" as it truly showcases the impeccable clarity of David Leonard and Leslie Jordan's vocals; the unison they manage is haunting and exhilarating. You may be tapping your feet and weeping at the same time.

What makes the album even more incredible is that with each track, the depth and beauty of the songs is magnified; even more so, God is glorified. The songs seem strategically placed to not only create an "experience" but a response to the Savior; especially with the concluding track "Your Glory/Nothing But the Blood." The collision of a fresh song with a pure hymn is not only effective but flawless.

Amazingly, the sound of the crowd neither drowns out the band nor seems absent. It is a special treat to hear such balance and, at the end of the day, really speaks well of those who don't always receive recognition - an excellent producer, engineer, and mixer. Everyone involved with this project should take a deep breath and know that this project is without a doubt, "A job well done." - Ryan Barbee, 4/21/13