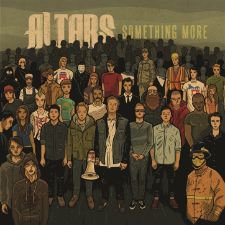 I was surprised when I heard the beginning of Altars' sophomore LP Something More, expecting a face full of Canaan Smith's growling screams. Instead, he started yelling like James from Make Do and Mend, gruff and melodious. The title track cracks open the album with fast beats and harmonizing guitar layers, and we don't even hear a full blast of screams until the track is more than half over. This is not the same Altars you heard in Conclusions.

It would seem the Colorado Springs natives have become wary of disappearing into the woodwork of hardcore influenced metal bands. As a countermeasure, they have added heavy experimentation to their sound this time around. It's all hardcore front to back, which in itself is a change, but you can hear clear influences from different sub-genres throughout.

The heavy shift toward melody in the chords and the fingerwork brings to mind Set Your Goals or Saosin in their earlier days ("happy-hardcore" comes to mind on tracks like "Revolutions" and "Eternity"; some of the drops in tempo are reminiscent of Hundredth ("Caverns" especially); but the parts of the album that truly shine are when they let their hardcore roots out, channelling some of our dearly departed favourites like Means and Saints Never Surrender. There are of course, still times when you can just shut your brain off and enjoy the chugging, which is really a matter of preference. Though there are a few tracks where the brutal interludes just disrupt the flow of the song ("Eternity" for example), "Question Everything" in particular fires off in your cerebral cortex with an itchy trigger finger. The pounding anthem of "Question everything, seek truth, spread hope" screamed over and over really gets the juices flowing.

As a hardcore band, Altars will probably be expected to show a lot of attention to their lyrics, and these are indeed solid: "I will choose t o love" ("Westboro"), "It's beauty that we need" ("To Give"), "Why should you be above someone else?" ("Transparency"); all the old contemplative hardcore maxims are present. They're important because the kids listening need to know how to behave after the album stops spinning.

In keeping with their DIY attitude toward recording, Altars takes a more organic path in some places on the album. Occasionally, they pull the production back and let the song breath, which helps us to remember that this music happened in a studio before it happened in our iPods. Although, at times, the drums sound a little distant from the other sounds. The experimentation goes a little overboard at times as well, for instance at the end of "Eternity" when an ambient post-rock influenced interlude goes on a little too long. You won't find a stronger improvement on Something More than the vast range of vocal styles, though occasionally Smith's yelling almost misses the mark. I can point and say "this is off tune," but I know many hardcore fans love that organic sound. It's another matter of preference.

Overall, we can hear a massive improvement in musicality from Conclusions to Something More, Altars certainly sounds more like their own band now, but I get the feeling that with all the experimentation this year, they're still refining their sound and have yet to find their niche. It's refreshing to see this level of progression from inside such a stagnant genre. Altars definitely gave us Something More this time around.