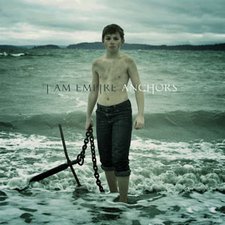 I Am Empire
Anchors

I Am Empire debuted with Tooth and Nail with somewhat mixed reviews. While Kings definitely had its high points, there was also plenty of room for growth and improvement. The band had a variety of sounds and didn't quite seem to be able to locate one in particular that could define "I Am Empire." With their newest release, Anchors, IAE have definitely nailed down their sound. While Kings was an enjoyable listen, Anchors shows growth in most aspects. The group remains musically adept, but the product has a much better and polished sound. Lead singer Austin Lions has also stepped his game up as well. Lions, whose high-pitched vocals tended to be a bit overbearing at times, is much more on point. Anyone anticipating the release of Anchors should be pleasantly surprised by the band's noticeable progression.

The record opens with "Gravity Bomb" and it's a nice taste of what's to come. It's an upbeat track with a great sound and Lyon's vocal growth is already evident. The album really gets moving with the rocking guitar riff that opens up "Gasoline." The song features a fast intro and break, and a more standard rocking verse and chorus that are highlighted by some effective guitar taps. While the first three songs are upbeat rockers, "Labor" is the first track that really grabs your attention. It's more of a mid-tempo song that relies more on overdrive and less on heavily distorted guitars. It will more than likely end up as a favorite of many as the singability is undeniable. The darker minor tones of "Sing" are another winner. In the opening verse, Lions proclaims, "You are worthy of a great song; so worthy of a good son that I could never be. You are evident around me, elegance resounding by grace I am restored, but inside I don't feel right."

The tempo gets cranked with another heading bobbing riff as "The Mastermind is Me" kicks in and continues to show IAE's all-around advancement. After "Tell Me Mirror," the guitars hit the delay pedal for the U2 feel of "Daylight." It's another softer song, but again, it really stands out as Lions sings, "I should have known you just a little more somehow, but time ran away along with my smile," in the chorus. Perhaps the best song on the album is up next with "Remedy." Lions' vocals are piercing on the chorus, but do not come across as "squeaky" which could best describe some of the vocals on Kings. A lot passion can be felt in the music, vocals, and lyrics here. "Blackout" is the final track and is a fitting end to a solid record. There are no acoustic songs or real ballad type tracks on Anchors.

Going into to Anchors I was hoping desperately for growth and improvement. Kings was indeed a satisfactory debut, but it begged for a little polish and definition. With Anchors, I Am Empire polishes their sound wonderfully. The band doesn't stray too extremely far from the sound of their previous release, but it is certainly more cohesive overall. As with most releases, some songs are better than others--"Gasoline," "Labor," "Sing," and "Daylight" stand out amongst the crowd--but I Am Empire have done a really good job of crafting a solid rock and roll record. Anchors hasn't broken any new ground, but should provide some enjoyment and decent replay value for fans of rock music in general.

I Am Empire proved to be one of Tooth & Nail's most promising artists back in 2011 when they released their rock album, Kings. The most glaring flaw in their debut album for T&N, however, was the unpolished nature of the record, but Anchors, the band's sophomore effort, has addressed that issue. Like Kings, aggressive guitars are still a powerful factor on Anchors, but "The Mastermind Is Me" and "Gravity Bomb" sound more refined than even "Saints & Sinners" and "Brain Damage." The highlights of the album are the softer rock songs that don't lack power or emotion. "Labor," "Remedy," and especially "Sing" feature amazing choruses that are infectious. The only missing musical component of the album might just be a truly intense, lights-out rock track. Like the previous album, Anchors has a moody side to the lyrics, but lead singer Austin Lions always brings hope back into the picture. The album addresses hypocrisy ("Mirror"), work ("labor"), and redemption ("Remedy" states: "Looking back at all my mistakes/They vanish with the pain this is the remedy for all the things we lost"). I Am Empire has clearly capitalized on their potential, and, as a result, Anchors is one of the best rock offering in some time. - Nathaniel Schexnayder, 3/24/13