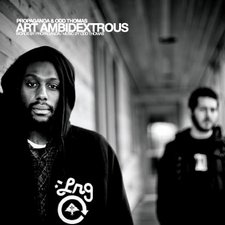 Humble Beast is a hip hop label that broke off from the California-based Syntax Records in 2010. With the start of 2011, Humble Beast, its artists and the people behind the label decided to go with their initial intention and give away all of their music for free (think of it as the hip hop version of Come&Live!). As of now, there are several free albums available from Braille, Xperiment and more, as well as one audiobook and a mixtape of scripture mixed with beats. The latest offering from Humble Beast comes from Propaganda. After hooking up with Odd Thomas for the production, Propaganda spit some rhymes and some poems for his album Art Ambidextrous.

Propaganda doesn't really rap or flow on Art Ambidextrous. "Lean" is an exception, but for the rest, it's more like beat-laced poetry (on occasion, his vocal style reminds me of Dan Smith from Listener). Every word he speaks is passionate and honest, and despite the non-flowing aspect, he does stay on beat. The whole album is non-stop, serious, Jesus-centered poetry that makes you think and also makes you appreciate life (except for the silly "Interlude"). He wastes no time getting on to his deep thoughts. The intro track "The City" says "And when you're born...with drugs and money launderers, now a husband and a father, that's proof that God loves you." A track that was previously part of the Humble Beginning compilation, "Beautiful Pain," finds its way onto the Art Ambidextrous tracklist as well. Propaganda speaks of things that are painful but are beneficial in life, and end up creating something amazing. One of the prime examples he uses? "Like hail Mary full of grace, she was proud of her stretch marks, how her skin expanded to bring forth the Son of Man, that's pain, but it's beautiful." He sees truth in the darkness, and, like "Beautiful Pain," finds beauty in the painful aspects of life. He even reminds us that he's also just a person and a Christian who needs accountability in "Dig." He says, "Hold me accountable, call me on my laziness, call me by my birthname, look me in the face and dig." It's clear that humility is important to him. When it comes down to it, the majority of Propaganda's lyrics are worthy of mentioning here. He's a fabulous lyricist, and he gives it all he's got. It's a testimony to the great lyrical gift that God's given him. On the musical end, it turns out that getting your beats and production from Odd Thomas is a very good idea. His beats are solid, and very versatile. He gets tribal in "So Help Me," west coast-ish in the straight-up hip hop jam "Lean," and just destroys it on "I Hate It," "Beautiful Pain" and "Dig." The music production isn't necessarily the cleanest I've heard, but it works in the album's favor anyway.

Both of these artists are very talented. Art Ambidextrous is a great album to get Humble Beast's 2011 started off the right way. It's available as a free gift, but if you have the ten bucks, support these brothers in their ministry. It's bound to be put on repeat in your playlist once you get a copy. That is, until the next Humble Beast release comes out. Be on the lookout for it, and until then enjoy Propaganda and Odd Thomas' skills.