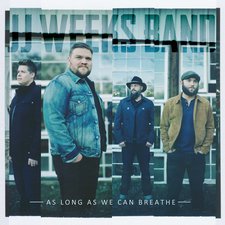 JJ Weeks Band
As Long As We Can Breathe


In March of 2013, JJ Weeks Band (led by Jason Clint "JJ" Weeks) released their major label debut, All Over the World, through inPop records. Having independently released three full-length records prior, the band displayed a confidence in their craft that resulted in a promising, even exciting, beginning. Three years later, As Long As We Can Breathe, released through Centricity Music, hopes to provide that exciting next step. Unfortunately, it may be a step in the wrong direction.

The record begins in a surprisingly mellow fashion with "In the Name," a song about overcoming and enduring the storms and fears we all face. It's not a bad song, but it does uncover the major problem that permeates this record. Unlike the band's debut, the songs on As Long As We Can Breathe are so focused on being inspirational and uplifting that they forget to simply be good songs. Even when they hearken back to the sound on their debut, it lacks any sort of substance because they're so preoccupied with something else.

Despite this, the inspirational tone works brilliantly in places where it's deserved. "Alive in Me" is an anthem any church or radio should be proud to play, and "Count Them All" is beautiful in its delivery, reaching for a more stripped-back approach that I wish was utilized a little more. The hip hop-inspired "Rooftops," featuring a guest spot by Christian rapper Tedashii, also stands out, despite feeling weighed down by its emotional prerogative.

But overall, As Long As We Can Breathe is an underwhelming effort from a band that once displayed so much potential. A little more focus on the songs themselves rather than the emotion they're presumed to convey would have made this a much stronger effort, but as it is, there's little that will make one take a second glance.