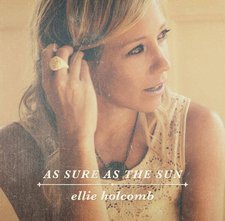 Ellie Holcomb
As Sure As The Sun

For a relatively obscure artist, singer/songwriter Ellie Holcomb has made her presence known in a big, yet somehow unassuming way, but it's no surprise considering her deep roots in Nashville's music scene. Some would know of her father, acclaimed CCM producer Brown Bannister, while others may recognize her role in her husband's band Drew Holcomb and the Neighbors, a musical diversion from her teaching career that became a seven-year run on the road. And yet, her own solo endeavors speak for themselves. Her two EPs Magnolia and With You Now rose to the top of iTunes Christian and Gospel chart with no promotion budget or big label support, and a Kickstarter campaign for her first full-length record was funded and exceeded in days.

All that to say, if you haven't heard of Ellie Holcomb yet, keep watching and soon enough you will, but not by the force of an industry marketing machine. There's a lot to love about her unapologetically faith-filled and charmingly quirky folk-pop sound. Her debut, As Sure as the Sun, blends the best of the indie songwriter style with timeless truth that doesn't come off trite or forced. It's an album that doesn't demand your attention, but quietly earns it by pointing to something lasting.

Holcomb sings with a mix of raspy earthiness and earnest sweetness--think a blend of Brooke Fraser's hushed introspection, Audrey Assad's ethereal style, and Katie Herzig's indie cool, adapting well to whatever song she takes on. The music itself is just as varied, whether taking on folk-tinged colors of slide guitar in "Night Song," playing in bright piano pop fields in "The Broken Beautiful," or settling into a soulful, almost country twang in closing track "I Wanna Be Free." Overall, it's a sparsely produced record that lets the songwriting itself take the lead.

Lyrically, this is as straightforward as it comes. Holcomb's writing finds its roots firmly in Scripture, building the original lyrics around a seed of a well-known verse. Maybe that's what makes these songs feel somewhat familiar right away. On the first listen, they don't seem all that remarkable, but in time they can give even the most over-quoted inspirational poster verses a breath of new life. One such standout is "Love Never Fails." While many a CCM song has riffed on 1 Corinthians 13, and the "love chapter" has gotten lots of sentimental treatment at weddings, Holcomb's charming voice backed with sprightly piano turn it into a prayer for God's help to live like the ideal is true. Another notable track is "The Valley," one of the first Scripture-based songs she wrote, that aches with longing and promise. Like the Psalms, despair and hope intertwine in the best moments, and turn it into something beautiful.

This isn't the kind of album that demands attention, nor is it an obscurely groundbreaking one. In fact, on the surface, it feels like another poppy indie folk record. But like the words from the Bible that she uses for her raw writing material, Ellie Holcomb's songs have a way of gently sneaking into your heart after a while.

Ellie Holcomb, who recently appeared as a guest on Andrew Peterson's annual "Behold the Lamb of God" tour, has gained acclaim like wildfire. Her solo EPs, following seven years with her husband's band Drew Holcomb and the Neighbors, topped iTunes charts with scarcely any promotion, so a Kickstarter campaign for a full-length album was almost a no-brainer.

As Sure as the Sun is excellent. The production is solid and the variety of musical ambience is impressive. Holcomb steps nimbly from somber piano to foot-stomping rollick to breezy melody. There are some particularly joyful tracks that are sure to make listeners smile in spite of themselves. Lyrically, there are moments of profundity, but there are also a few overused phrases, indicating a little room for growth. Fortunately, there are far more of the former than the latter. Holcomb's voice is lovely, though it sometimes seems a bit affected, with some long "r" sounds and stretched-out vowels. It's a very current vocal style, but sometimes current styles risk sounding derivative. Few will be bothered by it, but the affectation is really unnecessary and seems to distract from the sweet purity in the vocal underneath. Regardless, this is one fine album! - Review date: 2/15/14, Mark D. Geil

When I heard Drew Holcomb and the Neighbors' rendition of "Christmas for You and Me" last December, I was immediately captivated by Ellie Holcomb's personality-laden voice. Lucky for us, it wasn't long before we got a full-length album from Drew Holcomb's better half with eleven tracks of this goodness. While Ellie's work as a solo artist doesn't feel especially derivative from her music with the Neighbors, there is a sense of harmonic completeness that keeps the project afloat from beginning to end; it's rootsy and home-grown, but it's polished, attractive, and above all, worshipful. Every track has its individual merits, so even if you haven't heard of the Neighbors' work, As Sure As the Sun is well worth a listen. It's surely one of 2014's earliest surprises. - 2/16/14, Roger Gelwicks of Jesusfreakhideout.com