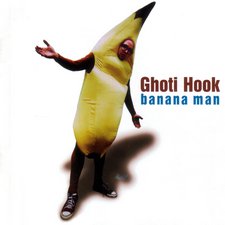 
On first glance, Ghoti Hook's Banana Man album (with its silly album cover, title, and song themes) seems to be a harder punk version of the Aquabats, but the album proves to be less juvenile and thus much more enjoyable after listening to it a few times and especially after delving into the lyrics. While being a collection of great songs (and thus an enjoyable listen), the album isn't a very cohesive project.

The album begins with the silly "Banana Man," which can be much appreciated by anyone who has a penchant for sillier songs (like Five Iron Frenzy, Peabod, The Aquabats, or Silly Songs with Larry) that contain very little lyrical substance. The problem is that track two ("Estevan") goes completely into left field with a song about a kid struggling with past abuse. This song takes the album to a much darker turn and then on track three goes back to the silly vibe with "My Bike." This issue repeats itself multiple times on the album. In reality, this album probably would have been better as two separate EPs. On a different note, it may have helped these songs feel less weighty by inserting them between silly ones, but the sequencing is awkward, nonetheless.

Despite the lack of coherence on this album, there are no bad songs on Banana Man. "Banana Man" is a super fun opener and, similarly, "Gimme A Chance" closes the album on an energetic and anticipatory mood. "Banana Man," "My Bike," "The Box" interludes, "Cowboy," Love By the Numbers," "At the Zoo," and "Gimme A Chance" all fit the silly vibe, whereas "Estevan," "Middle Ground," and "Just Fools" tread into weightier territory. "Middle Ground" addresses the difficulty of a child caught in the middle of a divorce and uses Joel Bell's scream-singing combo to great effect. "Monsters" sounds very different from the rest of the album with its slow, spooky build-up that would fit quite well in a Halloween playlist. Banana Man is certainly an album that I would recommend to any melodic punk fan (Christian or non-Christian). And the music aside, I don't think there are many better album covers in Tooth and Nail's 90's catalogue than this one.