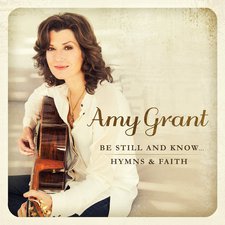 
First things first: Be Still and Know: Hymns and Faith should not really be considered a third installment in Amy Grant's popular Hymns and Faith series. Instead, it's more like a themed "Best Of" album, gathering six tracks from 2002's Legacy and four from 2005's Rock of Ages, along with single songs from a Billy Graham tribute, a 90's compilation album, and Grant's most recent studio album, How Mercy Looks from Here. Two new recordings round out the robust 15-track album.

The fact that the album is 87% previously released material might turn off some fans, but for listeners who missed the previous two Hymns and Faith albums, this collection is almost ideal. The musical style into which Grant has matured (rightly ignoring last year's remix album) is particularly well-suited for hymns. They are bright, well-flavored with country, and sung so well with Grant's earnest voice.

There have been widespread efforts at making hymns modern, relevant, and accessible, with a popular motivation to bring these rich old songs to a new generation. Consequently, the iTunes store lists almost 450 versions of "It is Well" alone, including versions by artists as diverse as Jars of Clay, eleventyseven, Dwight Yoakam, and a group called Nitro Praise.

Grant's approach to hymns seems a little different from so many contemporary "hymn modernizers." Listening to her takes, you get the feeling that these are, quite simply, songs she grew up with and songs she loves to sing. Despite some subtle complexity in the layers on some tracks, these songs don't stray too far from the sound one might hear during a front porch singalong (if, that is, one were privileged enough to participate in a front porch singalong with Grant and Vince Gill). The hymns never lose their identity, and without deliberate intention, they still become current and accessible. And when they work as an amalgam of Grant's style and Gill's, they work remarkably well.

The title track is new (though it has shown up in Grant's live shows for some time), and it's one of a handful on the album that's not a hymn. "Be Still and Know" is in the light, AC, couched-in-everyday-life motif that is right in Grant's wheelhouse. Invoking Psalm 46:10, the song is a fine reminder to pause our scattered brains and soak in the eternal. Album opener "Power in the Blood" is also new, and it's a sterling example of what Grant can do with a hymn written in 1899. Lavish guitars undergird the vocal and give the song a compelling drive (it does have "Power" in the title, after all). And if there's a better tenor background vocalist than Vince Gill, I've yet to hear him.

Be Still and Know showcases some of Amy Grant's finest work while reaffirming her staying power and continued songcraft. Without deliberately trying to introduce new listeners to centuries-old hymns and decades-old classics, this album should do exactly that. It's a wonderful thing to see songs like these become a prominent and important part of her impressive oeuvre, and it's equally wonderful to see her poised to contribute more for years to come.