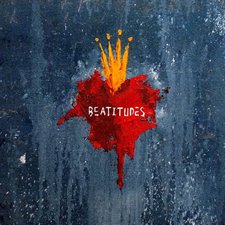 
"What does it mean to listen? I mean really listen, with no distractions or divisions...listening to listen, not to respond?"

These are the first words you will hear when you embark on the incredible journey that is Beatitudes, the decade-in-the-making project from Stu Garrard (AKA Stu G), the songwriter and guitarist from Delirious?. This album coincides with his book Words from the Hill, which details stories from people around the world who represent those who mourn and are persecuted; the meek and poor in spirit; the peacemakers and merciful; those who seek for purity, righteousness, and justice. These are the characteristics described by Jesus in Matthew 5, at the start of his most famous sermon, and the corresponding real life stories inspire many of this album's songs, written and performed by a multitude of talents from throughout the Christian music industry.

With a list of guest vocalists varied enough to contain both Matt Maher and Propaganda, it might be easy to think Beatitudes is just a compilation. Instead, this is a collection of brand new songs steered by the vision of Stu G, who has writing credits on every song. The quality control is impeccable across all 18 tracks, which nearly fill up an 80-minute CD. Everything is masterfully conceived and composed, whether it's a song featuring a veteran like Amy Grant or newcomer Terrian Bass, who contribute the somber "Morning Light" and the jazzy "Let My Dreams Fly," respectively. And no one is functioning as merely a vocalist; each singer also co-wrote his or her track, giving each a unique touch, such as "Carry On" by Michael W. Smith, which would have fit perfectly on his album, Wonder.

The artists involved contributed their talents because they believed in this vision, or because they were touched by the stories of the people Stu G has been encountering as part of this incredible, multimedia undertaking. This might be the most true of Audrey Assad, who brings us the refugee-inspired track, "I Will Be Your Home." Assad is the daughter of a Syrian refugee, and the first half of this eight-minute track is an excellent addition to her resume as an artist. In the song's second half, though, "I Will Be Your Home" transforms into something truly special: an instrumental featuring the talents of Hassan Al Zoubi. Al Zoubi is a first-generation Syrian refugee who plays the tabla drum and the Oud, (the Middle Eastern equivalent to a mandolin), to stunning effect, making "I Will Be Your Home" an absolute standout, worthy of its length. It's one of a handful of songs that run six to eight minutes, including the patiently rewarding "Heaven is Around Us" by John Mark McMillan and "The View From Here," the near-perfect epic by Hillsong United.

If there are any flaws to the album, it's the sequencing. The one song that falls short is "Oh Blessed," which is unfortunately track two. If seen as an overture, "Oh Blessed" functions perfectly, but as a standard song, it might turn listeners away. Things really get going with track three, "You Will Make a Way" by All Sons and Daughters. For the next ten songs, the record stays incredibly consistent stylistically. Much credit here is surely due to Stu G and producer Paul Moak (House of Heroes' Cold Hard Want, Leeland's The Great Awakening). However, after track twelve, where Bethel's Amanda Cook steals the show with her bravado performance on "Undivided," there's an awkward shift into "In the Middle," the album's first rock song. That shift is only accented by the next track, rapper Propaganda's outstanding highlight, "Make a Little Trouble."

In our playlist culture, such minor issues can easily be fixed by switching up a few tracks; and with this unwieldy set, I'm sure even the most picky listeners can whittle the album down to ten track they enjoy. Yet, I highly recommend taking this album head-on as a whole. The first listen may be awkward, as you try to discern what exactly this album is trying to accomplish, but the experience becomes more engrossing with each listen. There are also some fascinating ideas present, such as the contrast between Christians needing to be both peacemakers and troublemakers, depending on the circumstances and perspective. It's a lot to take in, but even without the concept tying it all together, this album would stand as a best-of-the-best representation of today's CCM. Considering the concept, though, I'd say Stu G has perfectly executed what he set out to do: embody the spirit of Jesus' beatitudes while simultaneously giving us a view of Christianity freed from its Westernized distortions and removed from the American dream. Jesus' words should be and can be as powerful today as they were two thousand years ago, but what does it mean to listen?

A vision 10 years in the making, the Beatitudes project is the brainchild of former Delirious? guitarist Stu Garrard. Beatitudes (a reference to Jesus' blessings in the sermon on the mount) is an original compilation album with an impressive roster of artists, successfully bringing together genres like worship (Hillsong UNITED, Amanda Cook), adult contemporary (Amy Grant, Michael W. Smith), pop/rock (Martin Smith, Stu G), and spoken word (Propaganda, Becky Harding). Though it may lack true stand-out tracks, and some songs have unnecessarily long outros, this 20-track album is a classic example of when the whole is greater than the sum of its parts. - 4/29/17 Christopher Smith