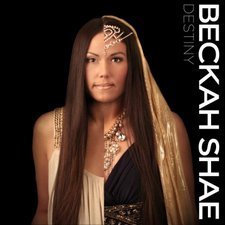 A year has passed since Nashville resident Beckah Shae released her fourth album, Life, which has received significant airplay on popular Christian radio stations, including Air1. Now, she's back with Destiny; while her music is recorded independently by her husband and producer Jack Shocklee, her style can be matched to the likes of mainstream artists such as Rihanna, Alicia Keys, and Leona Lewis.

Shae opens up her newest release with "Are You Ready?," taking a more stripped down approach to typical song openers. Nevertheless, we get a small taste of her wide vocal range as she sings "And we've never seen such extreme immorality, it just makes me wanna scream for mercy!" "Music" is definitely one of the album's highlights (and a personal favorite as well), combining a catchy dance tune with upbeat lyrics. Beckah tries to convey the strong influence that music has and how it is portrayed by society today. She states that "music can change an atmosphere," and I believe it is her mission to use her gift of music to reintroduce its true source and purpose. "Supernova" follows suit musically, while "Holy" showcases Shae's passion for the Lord and her desire to worship Him in His presence.

"Just To Know" also describes Shae's consuming love for the Lord and her willingness to disregard the treasures of this world ("This world has nothing for me, I count it all as loss") in order to gain Christ and know Him in a deeper way. The hit single "#putyourloveglasseson" states how our generation should not be so quick to judge others by appearance and that a person's heart is a true measure of their character ("God give us grace to see all things, to see man's heart the way you see"). "For Such A Time As This" is based on 1 Peter 2:9, reminding people that they have been specifically chosen by God to fulfill a purpose beyond human understanding.

"Show Me" cautions listeners to evaluate what they see and hear and encourages them to look to Jesus for the answers to life's questions. "We Are," another highlight, is the war-cry anthem of the record, calling all believers to rise up and "be the change." "Hope" contains melodic pieces resembling Beckah's former hit "Here In This Moment," while "Gold" reminds listeners that "What don't kill you can only make you stronger" and that growth takes place during the toughest situations. The rotation concludes with the title track, encouraging listeners to fix their eyes on the ultimate goal, eternity with Jesus Christ, and to embrace the destiny each one has been called to.

Beckah Shae does a nice job of meshing popular beats with the uplifting message of truth found in Christ. Although Destiny does not surpass the quality of most mainstream hip-hop and R&B acts, it is a positive alternative to those looking for something more than a contagious beat with watered-down words.