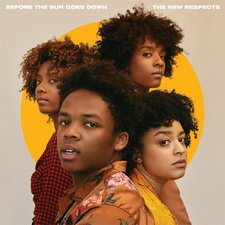 The New Respects
Before The Sun Goes Down


Jasmine Mullen, Alexandria Fitzgerald, Alexis Fitzgerald, and Darius Fitzgerald make up The New Respects, and they are doing something new in the Christian music scene, drawing from past influential genres - 1970s soul and 1960s rock - and fusing them with modern pop music.

Their story is quite niche: Mullen is the daughter of CCM singer Nicole C. Mullen ("Redeemer"), as well as music producer David Mullen. The Fitzgerald's, meanwhile, grew up as pastor's kids. Together, they are a family band, and The New Respects is an outpouring of their close bond.

TNR and their first album, Before The Sun Goes Down, are dedicated to having fun and giving people just that. To this end, the first handful of tracks are upbeat to mid-tempo songs. A couple highlights are "Hands Up" and the title track, "Before We Let the Sun Go Down." Both boast of warm harmonies, infectious melodies, and an upbeat energy. The band was fortunate enough to work with music veteran Theron Feemster (Eminem, Dr. Dre), as he was a producer for these and a few other tracks.

The lyrical themes up until the middle of the album include enjoying freedom and enjoying life, "surrender to the music/put your hands up" ("Hands Up") and "freedom, I'm chasing freedom/here I come" ("Freedom"). The latter half of the album tends to be more reflective. A notable track from this bunch is "Something to Believe In" for its style as well as its deviation from the central lyrical themes. In it, the band exposes their searching and vulnerability, "Give me something to believe in." This is all under a backdrop of future-esque 1970s soul, so it feels good. It is a welcomed detour from the feel-good songs at the start.

The New Respects benefitted from heavyweight songwriters on this album, Priscilla Renea (Ariana Grande, Fifth Harmony) and Ilsey Juber (Shawn Mendes, Miley Cyrus). However, rock-styled "Trouble" was written solely by the bandmates and is their most popular song on Spotify, with nearly six million streams. In fact, every song on the album is cowritten by the band members in some capacity. Clearly, this mid-20's group was paying attention to the unique world in which they grew up.

TNR are a little rock, soul, and pop and possess developed musical tastes, as well as instincts. While TNR have a good thing going with their creative sound, they could grow in their songwriting and figure out who they are musically. In songs like "Come as You Are" and "What Makes the World," the arrangements sound like they have been done before. It is not to say the songs do not sound great, because they do - and listeners should find this if they enjoy Motown or classic rock as well, but the tunes need a little something else in order to freshen them up.

The last three tracks differ greatly from one another, though each one encompasses an aspect of rock, soul, and pop, with "Frightening Lightning" as a standout for its high-energy electric guitar and quirky yet delicious chorus, "frightening, lightning... but don't it feel good."

The New Respects are something unique in the Christian music landscape. Not only do they have a new sound, but they also bring a fresh perspective. In a genre that is, by its nature, more reflective (and with good reason), Before the Sun Goes Down is certainly an album that will make anyone get up and dance.