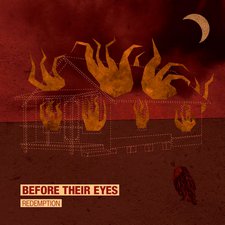 Before Their Eyes
Redemption

Romans 3:18 says "...there is no fear of God before their eyes." Despite this being their fourth studio album, Before Their Eyes has flown mostly under the radar for their musical career, somehow escaping notice for putting out pretty good tunes. Their mix of post-hardcore with some pop punk flare makes the band from Findlay, Ohio one of the most sought after bands in my player, and despite the many lineup changes, they seem to keep putting out solid albums.

The band's latest, titled Redemption, opens with and "Intro" which blends right into "Lies," a track released as a single and made into a music video. It is your typical BTE song entirely; the growls of "lies" in the chorus with Nick's high pitched vocals blend together for a great track. The song is exactly what fans have come to expect from Before Their Eyes and shouldn't leave fans disappointed. "Dream" is full of even higher pitched vocals and deeper growls as the band Breathe Carolina helps out as guests on the track. The music is good, too, featuring guitar chords and drum patterns similar to previous releases. While good, the music holds no significant changes and nothing overly creative. Other noteworthy tracks would be "Redemption," "Revival," and "Backstabber," each being solid.

Even though the musical creativity is a little lacking, there are some songs that have depth in meaning. "Revenge" tells the tale of seeking to right wrongs even with the knowledge that revenge is wrong in itself, where "Faith" focuses on fake Christians, even going on to say "you've been dressing up in sheep's wool; dancing with the devil." The band also takes the time to slow it down in "Everything" and "Live," singing about the greatness of the Creator. The former track is decent but the latter is great. Songs like "Find" and "Surrender," however, don't really offer anything special to listeners and can be easily skipped over.

Overall, this will be a nice addition for current fans of Before Their Eyes, with a steady dose of what we've come to expect. Again, the music on Redemption is good, but the album as a whole does leave you wishing for a little more creativity or diversity. It may not be the best Before Their Eyes record to date, but it's definitely worth spinning if you're into the hard rock scene.