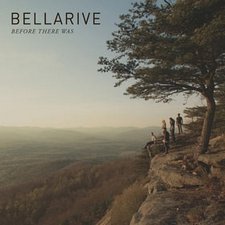 Worship music that aims for creativity is more rare than it should be, but when it's attempted, the results hit above the usual grade. Bellarive demonstrated this two years ago with the masterful The Heartbeat, and the follow-up Before There Was is here. Fortunately, the ingenuity wasn't in short supply, and their second entry on Sparrow Records is a prime piece of originality.

Just by the title alone, the average listener could detect a central theme to 2012's The Heartbeat. Indeed, heartbeats were the obvious connection that held the album together, but it was still used sparingly for maximum effect. Before There Was doesn't feel quite as cohesive as their previous record at first, but it takes more digging to find the inner connections. According to the band, Before There Was is inspired by Ephesians, which is a fairly open-ended book describing God's eternal purposes in detail. With this information in mind, however, the creative direction of this record is more guided than it seems.

The modern worship sound here feels very similar to The Heartbeat, but also like that album, the songs vary quite a bit in tempo and aura, giving the album depth that many worship albums lack. It feels purposeful all the way through, which is often not the case of live worship albums that meander from one song to another. One specific development since last time around is the vocal work; lead singer Seth Curran and background vocalist Melissa Mage mesh their voices together much more on Before There Was, which provides an extra dimension to the band's creative concept.

At their core, Bellarive is a worship band, but as has been the case for their short career, they sound their best when they avoid that stereotype altogether. So when tracks like "Your Great Love" and "Bring Us Back" follow a well-tread worship song pattern, their initial impressions are on the disappointing side. Thankfully, though, tracks like these are outliers, and they still sound fresher than the usual worship album. There's the overall feeling that the band isn't using these songs as filler, even if they are indeed the record's weakest inclusions.

Unlike The Heartbeat, Before There Was doesn't appear to have any tracks like "Taste of Eternity" that expertly walk the tightrope between corporate worship and artistic exploration, but there are several notable tracks here that keep the album especially memorable. Album opener "Let There Be Light" is the most energetic track here, and it sets up the album well thematically. Bellarive released "Lazarus" early on, but in the entire album's context, it serves as the showstopper. With elaborate atmospheric quality, the vocals fill the song's scope with energy and urgency. "Calling On Fire," "I Belong to You," and "Only You Can Raise the Dead" both serve as solemn praises that break the action effectively, while "Hallelujah to Saving Grace" works well as a modern hymn of sorts. "From the Very Start" is a reflective closing track, as well; while not as long-winded as The Heartbeat's "Stories," it closes the album by reflecting on God's creation.

After the hour-long album, it can be tricky to process everything the album accomplishes, but it's a worthwhile endeavor that reveals important truths with each successive listen. While perhaps not as ambitious as The Heartbeat, Before There Was takes itself seriously and provides plenty of surprises and standards uncharacteristic of the worship genre. A rich look at the gospel's power, Before There Was is a distinct highlight for this summer's playlist.

With the release of the music video for "Lazarus" back in May, Bellarive introduced a new dynamic to their sound, one which was experimental and foreboding (and altogether superb). While some had hoped or speculated that this would represent a new sonic direction for Bellarive, the actual direction of Before There Was (the band's second album with Sparrow Records) was more predicable; build a fairly solid core group of songs within their established sound, and then add a few tracks from both extremes (extremely experimental and extremely safe). "Let There Be Light" opens the album on a fairly generic modern worship note, but the band manages to pull it off within the confines of their established sound so that it does not come across as stale (in fact, it is quite enjoyable). Following that are the very Tomlin-esque "Your Great Love" and the mildly Hillsong-esque "Calling On Fire," before Bellarive finally lets loose all their creative energy on "Lazarus," and the equally foreboding "Save Us." These two songs are easily the biggest highlights on the album, but are so fanatically different from the rest of the album that it is possibly even detrimental to the album as a whole. "Chains" tackles the story of the faithful woman who was healed by touching Jesus' robe, and is another highlight thanks to its compelling lyrics, like "If I believe your name can save, then I would trust in what you promised / if you can overcome the grave, then you will overcome me." "Hallelujah To Saving Grace" and "Only You Can Raise The Dead" are also worth highlighting, the former for its hymn-like lyrical approach and the latter for its tense baseline. "Caught In The Middle" brings listeners fully back to their previously-established sound from back to their The Being Human Project days, and then the fairly standard closer, "From The Very Start." Overall, I feel like Bellarive took a moderate step back from The Heartbeat, falling into the all-too-familiar catch-22 of trying to stay true to their original sound concept while also making their music more accessible to the wider market. It is a fairly solid worship album with several stunning moments, but it simply sounds like they are trying to satisfy a bit too large of an audience than they are meant to. - Review date: 7/20/14, Mark Rice