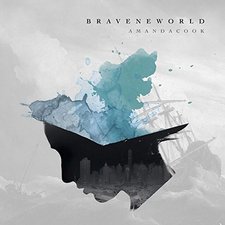 
There's no doubt the artists of Bethel have been crafting some of the best worship music around in the past six years. Amanda Cook, best known for her hits, "You Make Me Brave" and "Shepherd," is no exception. With her first full-length solo release, she steps down from the stage and out of the spotlight to create an album surprisingly different from anything we've heard from the collective before.

Brave New World is a near concept album exploring a reality where God is in all and is all. Featuring sweeping instrumentation, grand production and freshly poetic lyricism, Brave New World sets itself up as the musical equivalent of a lost-at-sea epic. Beginning with "Heroes," Amanda bravely takes the first step into the unknown. "Let the heroes rest, let the striving cease, I lay down my crown here at Your feet. I will trust Here in the mystery I will trust In You completely." "Shepherd," first heard on Bethel's You Make Me Brave, receives a toned-down redo here, improving on an already strong track. But it's "The Voyage" that serves as the first major highlight on the record. It does something few worship songs do by creating an atmosphere that isn't just inspirational and joy-filled, but fearful and uncertain. The album's protagonist is beginning to realize the weight of this voyage as God gently says, "You're afraid, but you can hear adventure calling, there's a rush of adrenaline to your bones, what you make of this moment changes everything.....I'll send the rain wherever we end up." "Kind," another brooding piano ballad, features some of the best lyrics on the album, pondering over the character of God. "You are not an angry man, you do not treat us with contempt, your voice is sure, your eyes are soft....you are kind." "Closer," and the album's resolution, "Pieces," are similar highlights, choosing to focus more on ambiance and atmosphere rather than a catchy hook.

This, however, can pose a problem. There are barely any songs on the record that stand out in terms of melody, and thus the record does become monotonous if listened to all the way through. The closest the album gets to a congregational worship song is "Highest Praises." On an album this heavy, it would have benefited from a couple more sing-along choruses to balance it out.

But overall, if there are any complaints to be made of Amanda Cook's debut full-length, they are minimal when seen in light of the record as a whole. Choosing to take a route few have gone, and mostly succeeding in the process, is something worthy of commendation. For those looking for songs that are a little more personal than the flashy lights of the stage, taking a voyage to Amanda Cook's new world is definitely worth the while.