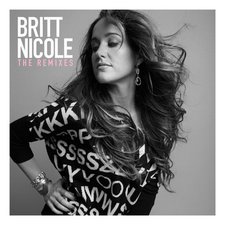 
Eight years after her debut, pop artist Britt Nicole is shaking things up with The Remixes. Remix gurus Capital Kings and Soul Glow Activatur (among others) have significantly renovated Britt's singles and fan favorites, replacing the pop-based instrumentation with EDM beats and synthesizers. There are several solid dance-ready and creative re-imaginings here (a few of which surpass their original versions), but other translations are not as successful.

Soul Glow drops the acoustic guitar and dub-step in "Ready or Not" and pads it with brighter synths and a spacious atmosphere. Though not as good as the original, it's a decent start to the album as Britt and Lecrae share their desire to spread the love of Christ. Capital Kings give "Amazing Life" a bigger drum beat and add a frenzied dub-step post-chorus which works exceptionally well. The Pro_Fitt remix of "All This Time" has a notably catchy dance beat, making Britt's personal story of God's grace even more celebratory than its predecessor. Smaller bright spots include "Glow," with its fun club vibe; and "Like a Star" with an intriguing experimental ambiance. However, it's MyKidBrother who steals the show with their innovative interpretation of "Holiday." They take the biggest risks on the album from R&B flavored verses to comically transforming Britt's voice to sound like a creepy man.

There are a couple less memorable remixes scattered throughout the album ("The Lost Get Found" and "Set the World on Fire"), but it's at the end where things really turn south. The excessively long "The Sun Is Rising" is not particularly interesting or danceable, rendering it forgettable and skippable. Despite being one of Britt's strongest singles, the two renditions of "Gold" are the weakest tracks on the album. This is especially sad considering the encouragement the original brings to those who feel like an outcast. The Lark version has a drum beat and synthesizers that do not fit with the chorus and simultaneously falls prey to a generic quiet-build-explosion formula. Jason Nevins' remix speeds up Britt's voice, making it sound awkward and unnatural. Removing the bridge was another mistake, but even worse is the editing where you can hear the start of the bridge before it cuts out.

The Remixes has a respectable spread of dance tunes and creative tracks, but the safe and clumsy songs make this a less valuable purchase. Also, it would be nice if this project had something special, such as a mega-mix medley or a new song from her upcoming fall release. Nonetheless, die-hard Britt fans do not want to miss this release. New and casual fans might be better off picking up the stronger tracks on iTunes.