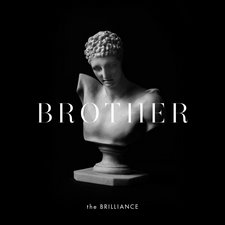 On the topic of beauty, The Liturgists state, "We believe that beauty is the heart and perhaps primary truth of the Gospel. If it's not beautiful, it's not worth speaking of or working on." This brutal honesty, and the rest of the collaborative's manifesto, detail the vision of these creatives; after the established musicians Nichole Nordeman, Sleeping At Last, and Gungor comes The Brilliance, a duo consisting of David Gungor and John Arndt. After creating liturgical music on an unsigned basis for the past five years, The Brilliance have now released Brother, their first album released through Integrity Music.

If the last name Gungor above rings a bell, David is indeed Michael Gungor's brother, and the similarities between the bands Gungor and The Brilliance are pretty apparent. Their overall artistic ideologies are very similar, though The Brilliance majors much more on serenity to carry the day. With some periodic exceptions throughout, Brother is a light listen that uses keys and strings to keep everything unified, and it provides an ideal soundscape for this type of material. This ongoing soothing atmosphere makes the album stand out well, though the sparse moments of percussion come at just the right times. David's vocals are also remarkably similar to his brother's, though they end up being a huge asset to the band's approach, using restraint effectively. What's especially interesting about this liturgical approach is that while everything is clearly drawn from Scripture, it doesn't ever quite feel congregational either. Instead, it's meant to be meditated on and prayerfully considered. There's also something very chilling about the title track's straightforward phrase "when I look into the face of my enemy, I see my brother," and it carries the album into a place of liturgical thoughtfulness early on. Another high point is the timely "Does Your Heart Break," which calls out to God in the midst of tragedy.

With all of this out there, Brother does not use the standard format for a worship album, and not necessarily in an expected way. With the two shorter tracks, "Love Remains" and "Prayers of the People," serving as interludes of sorts, and "May You Find a Light" closing the album in long-form fashion, it puts more focus on the album's main pillars ("Brother," "Does Your Heart Break," "Breathe," "Make Us One"). There's also a precarious way that several songs end with a sudden halt, and it's a little jarring on the first few listens as a result. These aspects don't detract from the overall picture, however, but they create a certain album concept that's all the duo's own. This isn't an album with many twists and turns, but rather a peaceful journey that can be enjoyed and thought over no matter the circumstance.

With years of independent work behind them, The Brilliance can see the culmination of their creative direction with Brother, and it's a promising beginning. What will be interesting, then, is seeing how The Brilliance's ways will evolve over the next few years. Their contemporaries, Gungor and Sleeping At Last, have diversified at a steady rate, and if The Brilliance does the same, the worship music picture will only brighten. Both unassuming and stunning, The Brilliance's Brother is an early highlight of 2015.

It seems as though Michael isn't the only Gungor with a creative musical mind, as his brother David has been active with his project The Brilliance for the last five years. Making a major label debut this year with Brother (on Integrity Records, who has admirably taken steps away from the worship music archetype in recent years), it's clear that The Brilliance was a choice signing. Brother is a marvelous indie pop record. Themes of the album range from loving our enemies ("When I look into the face of my enemy, I see my brother" from "Brother") to the finiteness of man ("Naked we came and shall return into the grave" from "Dust We Are and Shall Return") to unity ("Why do we choose who's in and who to cast out?...Can love return us back inside of that heart?" from "Make Us One"). One of the deepest and hardest tracks - lyrically, that is - is "Does Your Heart Break." It's a song that wrestles with doubt; we all wonder sometimes if God's listening to us, and this song asks if His heart breaks when He sees the least of us in dire need. Gungor uses situations like a child starving in a third world country, the blind needing sight, and he even references Eric Garner (without using his name). It's a tough listen, but it's followed by an uplifting song in "Love Remains." It's been hard to listen to most other albums right now because of Brother; it comes highly recommended, especially if you're a fan of artists like Jars of Clay, Paper Route, and yes, Gungor (particularly Ghosts Upon The Earth). This is one album you won't want to miss out on. - Review date: 2/11/15, Scott Fryberger

At times mellow and ambient, at times rich with edgy grooves, Brother is a collection that moves from indie rock to electronic to pop with ease. The Brilliance's songs here are thoughtfully written and engaging, Gungor's vocal delivery is soft, even gentle, while lyrically, the album reads like a psalm without stumbling into out-and-out CCM pop noise. There is a lot to like here for the patient listener, and pleasant musical surprises to appreciate with each song as the album unfolds. - 2/25/15, Sean Lex of Jesusfreakhideout.com