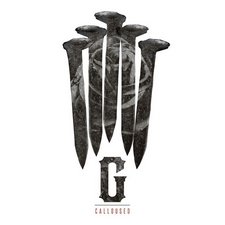 Two years ago, Alabama metalcore four-piece Gideon released their sophomore studio record, Milestone. And it was just that. They wrote an extremely entertaining album, and reached a commendable peak very early on, (with it being their first album with Facedown Records after being bumped up from their recruitment division, Strike First Records. Milestone was pretty much wall-to-wall breakdowns, but they were chunky as nuts! They have been called the Christian marketplace's The Ghost Inside, due in summation to their breakdowns, melodic overhead, and vocalist David McWhorter's audible resemblance to TGI's Jonathan Vigil.

Their newest album, Calloused, is about to take the front-running spot, so I wouldn't normally be talking about their previous album in so much detail at this time, but I want to emphasize that Milestone was great. So a follow up two years later should springboard their music upward, or at least sideways. But Calloused seems to take a few steps back instead.

They continue their tradition of squeezing breakdowns in anywhere they can fit them, though they mostly feel dry and tired out this time. Whenever a track really starts to groove, they throw in an awkward breakdown that really just kinks up the flow. Tracks like "Calloused," "The Limit" and "Drifter" are the best on the album because they push them forward more so with hardcore beats and catchy hooks. "Drifter" especially speeds up the blood by infusing the gnarliest drive on the album with very minimalistic riffs that really hit home. Gideon is actually very good at this the times that they do it.

The melody takes a backseat, making room for more thrashy nu-metal influence, and the fact that guitarist David McCartney once said his favourite bands include Slipknot and Hatebreed wriggles back into my memory. As for progression, or experimentation, or whatever you would call it, there isn't much except the addition of more clean vocals, which admittedly make some very catchy choruses on tracks like "Survive," "World of Hurt" and "Momentum."

The problem occurs when listening to the whole album. Every time the clean vocals come out of hiding, they are accompanied by what sounds like every other band member singing or screaming behind him, essentially creating entire choruses of gang vocals. Maybe they weren't confident enough with the quality of the singing, but this happens every single time (except for one time in "The Limit" when the vocals are accompanied only by fade/echo effects). It gets very old quickly.

Bands like Gideon have a lot of young fans who just need some positive words to smash with their headbangs. Many of the songs are mash-ups of cliché encouragement to stay strong, with an overall theme of determination: "Blood, sweat, drive. Do you have what it takes to survive." "Breathe life, breathe life, survive. Are you afraid to die, afraid to be alive? This time I've made up my mind, and I'm not wasting time. Survival of the fittest. Survive! Survive!" "Fall. Get up. Repeat." You get the idea. It's not exactly inspired, but it's good, positive stuff. There is one track, however, "World of Hurt," which speaks about a young girl who experiences tragedy, and chooses to end her life after living for years in "a picture perfect world of hurt." "A self-destructing work of art, she hit the bottom before her life could truly start." With the topic of suicide coming up so often lately, I am truly grateful that this song is out among the youths who will be listening to it. The dark story lights up when McWhorter sings, "Lower than ever before, but you're worth so much more stuck inside this world of hurt. So don't tell me that you're okay. The truth hurts, but hit me with it anyway. You're my flesh and blood, a part of me. When you bleed, I bleed."

Musically, Gideon could have (and have) done better, but considering the target demographic and the wholesome lyrics, all their young fans may just want another big mouthful of knobs to chew on.

Gideon is one of those underground metal bands that, once discovered, you also find a whole slew of quality metal bands (Fit For a King, Mouth of the South and Silent Planet come to mind). This is the third record of their career and the quality of their music has greatly improved since they first began. The title track, "Calloused," has Daniel McWhorter screaming about how one must stand strong in the midst of crippling insecurities. This particular track has a squealing guitar tone that is uncharacteristic for metal, but made the breakdown stand out that much more. The third track, "Survive," features a familiar vocalist in the metalcore community: Caleb Shomo of Beartooth. Lyrically, it's the most uplifting song on the album, having all three vocalists encouraging the listener to have endurance during their struggles. Calloused features many tracks with bruising breakdowns, catchy choruses and crushing vocals. Gideon have come prepared to be a staple in the underground metal scene, and with an album as good as this, they probably won't remain underground much longer. Check out "Survive." - Review date: 10/26/14, Dylan Minson