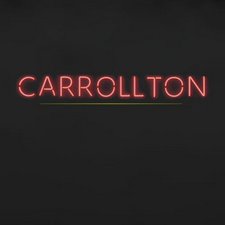 
No matter where the winds of the music industry or pop culture blow, there will always be a rootsy rock and roll band somewhere (often, but not always) in a rural spot playing a small coffee shop, church or bar on a Saturday night. With just basic, honest instrumentation and few computer tricks to be found, this band will win the day by just singing their hearts out and writing simple songs that reflect their lives around them. From the Lumineers to Mumford & Sons, Needtobreathe to Zach Williams, roots rock will always be around, weaving in and out of style as the years go by.

Carrollton, a dusty, organic band that named themselves after their small Kentucky town, is one such band, and with a number of releases and many years of touring under their belts now, have returned with a self-titled release that by all rights, should grow their audience further still. With the full-throated roar of new lead singer Stephen Moore (who fits the band's vibe almost seamlessly) front and center, lead song "Hold You" starts with a countrified shuffle that quickly morphs into a stomper of a tune that features lots of great organic instrumentation (acoustic guitars, harmonicas, perhaps a banjo or two) and an easy but insistent melody that sounds like a great, rousing Sunday morning song seventy-five years ago. Second track, the rollicking and slightly-menacing "Something To Sing About" brings the back-woods fire, and fits nicely into the aesthetic that the band has been creating for more than ten years now. Third track "This I Know" follows suit, adding some gritty electric guitars and soulful background singing.

But it's truly on track number four, "Not Afraid Of The Dark," where the band turns a corner into a more complex and epic songwriting area. With a start / stop rhythm and a unique choir chiming in from time to time, the melody and build of the song might be the best thing the band has ever put down on tape (so to speak). With the choir strategically breaking in from time to time, lead singer Moore testifies that "I'm not afraid of the dark / but I used to be / that little kid hiding under covers / every time the lights turned down / that was then this is now / and the monsters ain't in the closet / the stuff that scares me now / lives right outside my front door / because I've grown up and gotten stronger / though my problems got bigger too / in days by I've come to realize / that I'll never stop needing you."

The following "In My Sky" grooves easily along as a needed come-down from the first four songs, and fills a needed moment of worship. "Choose To Love" introduces a slightly-more modern tone (reminiscent of the aforementioned Needtobreathe) that incorporates keyboards and an persistent electronic beat. That it still fits in the band's organic neighborhood is a testament to Carrollton's veteran songwriting status. Early single "Jesus Is" rings out nicely with an encouraging message and a repeated prayer that there would be "a love like a fire in your heart." Final song "My Source" ends the album with a mellow prayer for the Lord to be the center of every day.

Carrollton clearly took time to craft a wonderful set of songs that both sound of-the-moment and timeless at the same time. With only eight songs, the album just needs a few more tunes of varying shades to launch it to classic status, but that's a small complaint. In these uncertain times, Carrollton's songs are well-crafted, hope-filled anthems that will resonate with listeners for years to come.