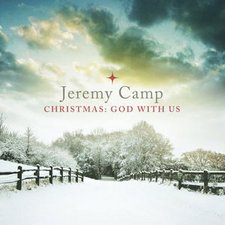 Jeremy Camp
Christmas: God With Us

It's been a decade since Jeremy Camp debuted his signature, soulful rock singer/songwriter music, immediately delivering anthems for believers everywhere who may find themselves in times of doubt in their faith. After chalking up over thirty number one singles at radio since 2002, it's no surprise that Jeremy's sound has become even more radio friendly over time, trading his original more rock-based songs for a lighter, more accessible sound. But now Camp is stepping into new territory for him: Christmas music. To be fair, Camp has in fact contributed to a couple Christmas compilations in recent years, but his latest studio album, Christmas: God With Us, marks Jeremy's full-length seasonal debut.

What might fans be able to expect from a Jeremy Camp Christmas record? Just about all facets of Camp's musical repertoire seem to have locked hands around the yule log to form God With Us; even the album's title suggests a worshipful approach to the Christmas season. But the album bursts open with an unabashed rock anthem in "Jingle Bell Rock." It's fun and joyous Christmas frivolity that seems like something we never hear in Csmp's music, lyrically speaking. With almost every Jeremy Camp song containing some kind of worshipful expression or poignant reflection, a song like "Jingle Bell Rock" sounds like Camp's finally getting a chance to just let loose and have fun. And judging by exclamations of "Yeah! C'mon!" more than once during the song, he sounds more than thrilled to be able to rock once again. This style seems to actually fit Camp's voice in a way few probably even imagined. (It makes you wonder if the man was meant to be born in a time when rockabilly was king and so was Elvis.) "Hark! The Herald Angels Sing" begins what is otherwise the heart of Camp's foray into seasonal music, traditional Christmas hymns with a worshipful focus. However, Camp attempts to take already worshipful songs that we know and love and put his own personal touches on them, with mixed results. For "Hark!," he adds a few lines of "We bring glory to Your name!" and in "Joy to the World," he pauses for a repetitious "Hallelujah, hallelujah, hallelujah, Christ is born/ ...And the weight of the world is on His shoulders and His kingdom will never end," giving the songs a praise & worship stamp that isn't really necessary and feels out of place in what are songs that already praise the Savior. Again, it gives it a personal touch that some may find refreshing, but it otherwise feels a little too forced and maybe even imposes on the original composition too much. "O Little Town of Bethlehem" adds "You bring us peace... Hallelujah to the Lord" with strings and a driving, pounding beat, while the otherwise lovely closer, "Away In A Manger," finds Jeremy interrupting the flow of the song with a prayerful "Be near me Lord, Be near me Lord." Diehard Camp fans will probably love, if not expect, his own ad-libs like these, but diehard fans of the traditionals (despite countless renditions of these songs already existing elsewhere throughout time) will probably struggle with accepting the changes.

In much of the same way that "Jingle Bell Rock" seemed like a fresh new musical expression for Jeremy, a tender traditional Christmas song like "Have Yourself a Merry Little Christmas" is a real treat, while "Let It Snow" allows Jeremy to just rock out once more. Camp then offers his own unique take on Mark Lowry's beautiful "Mary Did You Know" in a near rock-opera-esque fashion. And, sadly, the only original on Christmas: God With Us is the title track, which doesn't sound much different than any other Sunday morning worship song. It's acoustic (and later string) driven as Camp sings, "Hallelujah, the King has come / Beautiful Savior, God's own son / Hallelujah, the Christ is here / So rejoice for our salvation's near." It's a great song for churches looking for a modern worship Christmas tune, but it doesn't really seem to fit naturally among the traditionals presented here.

Overall, Christmas: God With Us is a pretty good first holiday offering from Jeremy Camp. Fans of traditional Christmas songs will probably find a lot to love on here, while those looking for fresh and original material will most likely be disappointed. As for me, I tend to lean toward traditional covers delivered in a familiar form with a signature touch by current artists, and Jeremy has done a pretty good job at leaving his own mark on familiar songs. The additional lyrics don't always work, but it may be just enough of an update for some people to find these familiar songs fresh again. If anything, just hearing Jeremy rock out and have fun on a few songs here is worth checking out the record for alone. There should be at least a few songs on Christmas: God With Us that will be worth replaying each holiday season, while fans of Jeremy will certainly want to add this into their annual seasonal rotations.