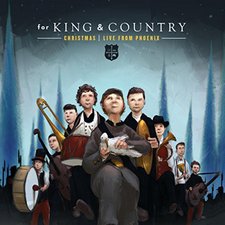 
The Christmas story can often get overwhelmed with all the holiday schmaltz that gets tacked onto it every year here in the Western World. But if you strip away all the commercialism, all of the plastic and Styrofoam artifice, all of the 1950's, Frank Sinatra nostalgia (as great as that period of Christmas music and movies was), there is an epic story to be told about the beginning of God's rescue plan for his fallen children.

A story this epic, this big, deserves a musical soundtrack that is so much more than warm feelings and nostalgia. Thankfully, in the past few years a few select artists in the (larger) CCM world have released Christmas albums that thematically and musically capture the epic story well (Jason Gray, Andrew Peterson, Over The Rhine and Josh Garrels come immediately to mind).

Add for King & Country to that list. This group of Aussies (well, fronted by Australians) has quietly been writing and releasing Christmas music since their beginning, and with Christmas - LIVE From Phoenix, they have finally released a full album's worth of their take on the Christmas music tradition. And with their theatrical musical bent well in place, their take on the theme of Christmas is well done and epic, if falling a bit short as a live album (though that's a small quibble indeed).

Starting off with now-standard "Little Drummer Boy", for King & Country's trademark, huge rhythmic attack is given free rain on a song that is literally about drumming. The rhythmic onslaught on next number, beloved (and often droning) carol "O Come O Come Emmanuel" lifts the familiar and haunting ancient melody to new heights.

But it's the band's original Christmas anthems that seamlessly fit into the concert flow that make the album a unique work. The epic "Baby Boy" (complete with a great, haunting use of sleigh bells and xylophones), the rhythmically stuttering "Glorious" and the sweetly romantic "Into The Silent Night" all add to the feel and tone of the set list, and sit nicely alongside the re-arranged originals like audience sing along numbers like "Joy To The World" and "Hark The Herald Angels Sing". The ending "Proof Of Your Love" (sung with sister Rebecca St. James, who's no stranger to Christmas music) gains new context here, and was a great choice to end the set.

If only the songs had been drawn out a bit more, given a few more minutes to breathe, or if there had been a few more instrumental passages, Christmas - LIVE From Phoenix would have been a knock-out live album as well a great Christmas one. But that critique aside, the album is a great one for reminding the listener that Christmas is more than just fuzzy feeling and nostalgia. It was the proof of God's love for fallen humanity.