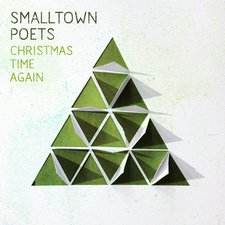 Extended periods of time between successive albums can be a sort of mixed blessing for the artists and bands that wind up creating them. On the one hand, it affords the members in question the luxury of molding a given record into exactly the form and fashion they ultimately desire before unleashing it on the buying public at large. On the other hand, though, it can often serve to dampen any accumulated artistic momentum, raise fan expectations to unrealistically high levels, and, worst of all, render a long-awaited offering all but passé before it ever hit the streets.

Smalltown Poets front man Michael Johnston and his band mates are only all too familiar with this phenomenon. The band's consummate self-titled debut and equally winning follow-on, Listen Closely, were generated during a ten-month flurry of activity in 1997 and 1998, and were followed only slightly less quickly by the appropriately-titled Third Verse in 2000. Nearly a half decade passed, however, prior to the release of the somewhat patchy It's Later than It's Ever Been, after which time Johnston and his cohorts decamped for an extended hiatus.

Taking up where 2011's holiday-themed Smalltown Poets Christmas left off, the original quintet (which finally reconvened in 2010) once again turns its collective attention to all things Noel. Like Third Verse and Later before it, the latest outing turns out to be a somewhat patchy affair. The ethereal "Cantus Sacrum Nocti" is graced with a haunting choir-led front section which transitions to an equally stark and mesmerizing rendition of "What Child Is This." The magnificent opening track, however, is followed by "The Wassail Song," an absolutely jarring about-face that jumps between frantic psychedelic-tinged acid guitar runs and a piano-based jig that sounds as if it might have come from a Saturday morning children's cartoon. The remainder of the first half of the project is fleshed out with mostly-winning originals ("Christmas Time Again," ""This Day in Bethlehem") and less impressive standards, like "Joy to the World" and "Angels from the Realm of Glory," the latter of which sounds more like a perfunctory first run-through rather than an actual final version.

Things do settle down, for the most part, during the latter portion of the proceedings. "Sing We Now of Christmas" and the supremely reverent "Good King Wenceslas," like "Cantus," are buoyed by the same reverent folk-pop that fueled the superb multi-artist City on a Hill albums released between 2000 and 2003. The sublime Celtic-based "Merrily on High" and infectious a capella take on the African-American spiritual, "Children Go Where I Send Thee," toss in just enough stylistic variation to keep things interesting without coming across as incongruent. The exquisite piano-driven ballad, "Christmas Lullaby," is a textbook study in simple understated beauty. And "Auld Lang Syne" closes the proceedings, not with the all-too-familiar interpretation that most listeners are so well acquainted with, but rather with an ethereal instrumental aesthetic that renders it a uniquely chilling masterpiece.

Of course, most discussions among the band's long-time devotees inevitably migrate back to the brilliant inaugural pair of albums, both of which, even after all these years, still stand as high-water marks in the group's back catalog. And perhaps rightly so, given the fact that none of the group's efforts, including the latest record, have matched Listen Closely or the debut in terms of unflagging energy and consistency. That being said, for all of its shortcomings, Christmas Time Again is still as good as, or perhaps even better than, any of Johnston & Co.'s records from the post-1998 timeframe. Fans of the pre-millennial works may bristle at the decidedly less power pop-oriented nature of the new project. Taken on its own merit, however, the five-piece's most recent undertaking is a worthy, albeit slightly uneven, addition to its thankfully still-growing body of work.

After seven years of silence (2004-2011), Georgia pop/rockers Smalltown Poets re-emerged with their first Christmas album, Smalltown Poets Christmas. Now a couple of years and one EP later, the Poets are back with Christmas Time Again, their second Christmas offering. While the album starts off promising with the nice instrumental intro "Cantus Sacrum Nocti/What Child is This," as well as the festive and super catchy "Wassail Song," the album just doesn't reach any of the heights of its predecessor. The original number, "Christmas Time Again" is a winner and plays out as expected from a good Smalltown Poets song, but the strangely covered "Good King Wencelas" throws the album off kilter a bit. Also adding some nice touches is the Poets' take on tracks like "Joy to the Wolrd" and, even more so, "It Came Upon a Midnight Clear." For me, the most fun track is the southern gospel feel and a cappela treatment of "Children Go Where I Send Thee." The Poets shorten the track quite a bit as the lyrics jump from "four" to "ten" and never go past ten (traditionally the song has 12 "verses" and works very similar to "The 12 Days of Christmas"). As a fan from way back in 1997, I always get excited when Smalltown Poets release a new album. Unfortunately, Christmas Time Again is just missing something. There are definitely some enjoyable songs here for the Christmas season, but overall it falls a little short. - Review date: 12/3/14, Michael Weaver