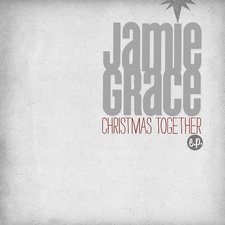 Jamie Grace has no doubt been one of 2011's rising stars. With her full-length debut on Gotee Records, One Song At A Time, selling big since its September release, largely in part because of the smash single "Hold Me," Jamie has made a large splash as a new artist. With a purely distinctive style that makes her debut so memorable, a Christmas project is the perfect means to capitalize on her big year. Christmas Together EP does exactly that.

Opening with the EP's original title track, the acoustic and hip hop percussion sound quite a bit like a song that could easily have appeared on her album, but the jingling bells subtly placed in the background makes it "Christmas-y" enough. Lyrics such as "And unless you got 20 people stuck on an elevator/I can't imagine a time when we're all this close" are certainly hard to call the least bit profound, but it's a fun seasonal song in every sense. Jamie's version of "O Come O Come Emmanuel" is a very upbeat rendition of the classic, but it fits Jamie's style like a glove.

A cover of Alvin and the Chipmunk's "Christmas Don't Be Late" comes next; at first glance, the appearance of this song looks trite and uninspired, but Jamie captures the song in a joyful and enticing way. Though lacking real depth, it's hard not to enjoy it for its childlike passion. Though some could be quick to label this project as disposable and full of saccharine, Jamie's arrangement of "What Child Is This?" will prove naysayers wrong; it's by far the most accomplished track on the set. While staying true to Jamie's musical approach, it's all the more a welcome and pleasant change in the EP's progression. Jamie's labelmate Abandon Kansas makes an appearance, resulting in quite the stunning duet between her and Jeremy Spring's voices.

EPs as short as these may be quick and simple listens for the Christmas music consumer, but the four songs on Christmas Together EP are special in their own right. If nothing else, they deserve a chance before being immediately dismissed, as they capture the joy of the season without fail. Especially for newly-convinced fans of Jamie Grace's style, her four-song offering should serve as a pleasurable venture this season.