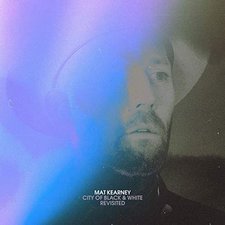 
Ten years ago, singer-songwriter and pop mainstay Mat Kearney released City of Black & White, the highly anticipated follow-up to his breakthrough LP, Nothing Left to Lose. A decade later, Kearney returns to the scene bearing a sweet, lo-fi re-recording of five selections from City of Black and White. This time around, the stripped-down tracks possess the warmest of vibes -almost lullaby-like- and harken back to the sensations felt when a vinyl record would softly spin over the wooden turntable.

Kearney's smooth vocals have always serviced his albums extraordinarily well, but this EP frames his voice in a new and refreshing manner. The City of Black and White Revisited EP opens with the title track, which has been simplified and given some breathing room. "All I Have" opens with the ironic (and now outdated) lyric "here we go at it three years later," which effectively puts into perspective just how long Kearney has now been at it (nearly eighteen years since his first EP dropped). The flow and pacing of "All I Have" leads the listener back to the song's original nostalgia with a perfect synthesis of calm and emotion.

"Fire & Rain" is an enjoyable revisiting, but it lacks a little bit of the punch heard on the original, while the reimagining of "New York to California" highlights the lyrical and vocal aspect of the piece. Kearney closes out the EP with "Closer to Love," this time outfitted with nothing more than some soft percussion and acoustic guitar work. The simplicity of this rerecording helps draw out the beautiful nature of one of Mat's best-known songs.

Ultimately, fans of the acoustic singer/songwriter genre will find an abundance of things to enjoy about this EP, as will nearly all of Kearney's existing fans. If you haven't given his past discography a chance, the City of Black and White Revisited EP is as good of a place to start as any, working as a tasteful contrast to his more recent, electronically driven music.