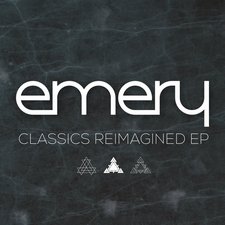 
Most bands who last over a decade can look back at their earlier entries and wish they did some things differently. Even the greats are restricted by deadlines and budgets. Time itself plays a huge role in changing tastes, and the "boys" of Emery seem to be feeling that particular itch at this point in their careers. Continuing their trend of reworking fan favorites, the Classics Reimagined EP features three of the group's beloved tunes in more "grown-up" settings.

The challenge of rearranging an existing song is that it has to be both just as good as the original and somehow different enough to be worthwhile. In short, this tracklist easily accomplishes both goals. "So Cold I Could See My Breath" replaces the familiar, overly aggressive guitars of The Question with a grooving slow burn that culminates in a classic Emery chorus. Ironically, the song hearkens back to the title better than the original recording since it feels much more wintry. The delayed keys and intricate chord choices tell the story of the lyrics better than its previous rock setting. At the same time, the song is able to maintain energy by switching up the instrumentation pretty often, making this work quite well as an opener once again.

Of all the songs on this EP that could have used a redesign, it's definitely "As Your Voice Fades." Though the guys chose not to change any of the overly emo lyrics, the acoustic emphasis and removal of the mediocre screaming provides the song with a haunting mood that the subject matter deserves. Even the female spoken word section is replaced with a more emotionally appropriate and effects-heavy recitation by lead singer Toby Morrell. Allowing the instruments to do more of the storytelling also allows for the group's complex songwriting to really shine through in vocal harmonies and delicate guitar and keys tones.

When I first saw the tracklist, I was most nervous about "The Smile, The Face" being on it. As one of their heaviest and most engrossing songs, I questioned whether or not there was anything to add. The angelic background vocals and softer expression of the chorus definitely proved me wrong. Though this one is pretty similar to the original for most of the runtime, the surprising mellotron and vocal effects during the breakdown make for a uniquely eerie vibe that simply can't be found anywhere else in Emery's discography.

It's hard to find anything to complain about on such an expertly-handled project other than its brevity. An entire album of this concept would have been exceptional. Additionally, some of the vocals feel distant and not properly mixed, but this is probably due to the rush to get the EP out in time to be included with their new album pre-orders. The Classics Reimagined EP is definitely a volume meant for the hardcore fans, as it's only available to those who donate to Emery's Indiegogo campaign for their upcoming seventh album. Nevertheless, if the group's hope was that this EP would generate buzz amongst their fan base by displaying their musical maturity, then the general expectations for LP7 should be sky high right about now.