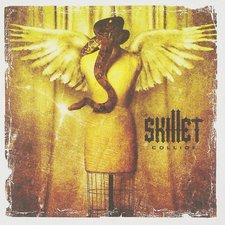 
Skillet began in 1996 with a powerful garage rock sound featuring frontman John Cooper's unique vocals. They soon forsook their raw rock sound for an electronic-fueled modern rock format on their sophomore release in 1998. In 2003, Skillet reinvents their sound once again to offer their hardest hitting release to date. Despite some obvious influences from today's mainstream modern rock scene, Skillet released Collide in November of 2003 to the Christian audiences, a rock album that can rival anything in the general market. In fact, Collide grabbed the attention of mainstream audiences as well and the album was re-released six months later on Lava Records.

What's interesting about Collide, is it marks the band's reunion with Paul Ebersold, the producer from their self-titled debut record. Since the release of the record, Ebersold has gone on to produce such mainstream acts as Three Doors Down, Sister Hazel, and Spacehog. As Skillet's sound has matured and progressed over the years, Ebersold's producing techniques have changed as well. While Skillet's debut was often compared to Nirvana or Bush, their later work was oftentimes compared to Marilyn Manson, all the while managing to rise above these artists in message and talent. Their 2004 re-release of Collide is comprised of eleven surging rock tracks screaming for hit status. The electronic backdrop is almost completely gone, replaced instead by a raw, more aggressive straight-up rock sound that has been missed since their debut. While production was kept rough and deliciously dirty on their debut, here it's polished, but to powerful perfection. Cooper and company didn't let overproduction steal the rock joy from their sound. Songs like "Fingernails" and "My Obsession" hit harder than any previous Skillet recording to date. They showcase Cooper's signature gritty vocals, passionately driving these songs about Godly reverence and struggles with our own failures and frailty.

In fact, Collide is very much about the frailty of mankind. Cooper recently described the title as meaning "that when faith and fear collide, God will be your anchor." It's definitely a clear theme as expressed through our need for Him in "Savior" or possibly the strongest track on the record, the encouraging "Imperfection." Struggling through life can turn up plenty of days where we feel unloved, broken, and falling especially short of the what God or others might expect from us. "Imperfection" is a fierce modern rock track that begins with a heartfelt encouraging word to those with heavy hearts as Cooper continues on to paint a familiar picture, "Tears falling down again / You fall on your knees / You beg, you plead / Can I be somebody else for all the times I hate myself? / Your failures devour your heart in every hour / You're drowning in your imperfection..." The song doesn't end before hope is offered through God's loving touch.

The Lava Records re-release version of Collide includes a new track, "Open Wounds." The theme of the song is noticibly different than one may expect from Skillet. The song tackles the heavy topic of Cooper's bitter relationship with his father from his childhood. Although devoid of any spirituality, the song is, unfortunately, a topic many can relate to and is likely to draw new listeners. Musically, "Open Wounds" fits in really well with the aggressiveness of the record and is a fine addition to the track listing. The addition of this song shifts around the track order nicely from the original release, too. "Open Wounds" is followed up well by the hopeful love song "A Little More."

Ebersold helps the band piece together a rock album that can easily find a place in the general market. Musically, the album sees major influences from the current modern rock trends, with many moments inspired by bands like Three Doors Down, or more noticably Linkin Park on tracks like the title song, "Savior," or "Fingernails." While it's very noticable in vocal style and delivery, or musically in the usage and placement of strings on certain tracks, the songs are so solid and unmistakably Skillet that these moments are forgivable. However, it's the tracks that have no real "sounds-like" moments that the band shines the brightest. "A Little More" and "Under My Skin" are as close as the band gets to ballads on Collide, as each have their melodic and softer moments amidst what adds up to be just another great rock number.

All in all, Skillet's sixth offering, Collide, is arguably their most solid to date. The mainstream re-release merely enhances what is already a great rock album. Other bonus materials on the record include a video interview and some other minor goodies, solidifying this as the version of Collide to own. Although not perfect, Collide takes the rock quartet to another level with an album that can truthfully be regarded as one of the best rock albums to come along in awhile. This is one swing of the frying pan that will definitely leave a lasting mark.