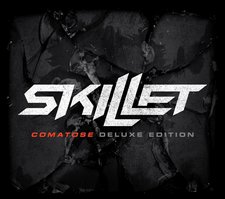 
In an age of re-releases and "special editions" galore, Skillet is the latest to join the throes of album revisitations, offering a CD/DVD "Deluxe Edition" of their hit 2006 record Comatose. For this particular second time around, Comatose is given an additional song to its original eleven-song tracklisting that had been recorded too late to make it onto the original release last year. And in addition to these twelve studio songs, five "acoustic" renditions of tracks featured herein are tacked on at the end. Finally, to round out this re-release, a DVD is added as a second disc that includes four music videos.

As a whole, the packaging for Comatose: Deluxe Edition, which boasted new artwork, merely offers a slip cover with new artwork on the front and back, and the actual CD case retains its previous back and front cover. In fact, the CD jacket is exactly the same - no lyrics included for the bonus song, and the artwork under the CD tray has been replaced with a much less interesting solid-orange coloring. Most importantly, however, how does Comatose feel as a deluxe release? The new track, "Live Free Or Let Me Die," is an edgy rock anthem that only suffers from a slight resemblance to something you might have heard from Disturbed several years ago. The familiarity of the track robs a bit of the thrill of having a new song here. It rocks, but I don't want to be reminded of anything by Disturbed when listening to Skillet. Also, when Skillet re-released Collide in 2004 on Atlantic and added "Open Wounds," the song wasn't just haphazardly tossed onto the end of the tracklist. Instead, it was carefully placed, even slightly re-ordering the other songs so it would fit nicely. Here, it falls directly after the album closer, "Looking For Angels," and just doesn't fit there. The acoustic songs that follow are wonderful little added bonuses, however, they vary in approach and quality. "Rebirthing" is clearly a new recording presented in an acoustic fashion, which is ultimately the point of an acoustic rendition. However, the four songs that follow - "Yours To hold," "The Older I Get," "Whispers In The Dark," and "Say Goodbye" - seem nothing more than acoustic remixes of the original studio recordings. And with three of them having originally been mostly rock ballads already, the "acoustic" mixes really aren't that different. Also, this mix of "The Older I Get" was released earlier this year on iTunes, so some fans will already have this particular offering, which, on the bright side, now they can own for the first time on a disc. Of the acoustic mixes, "Rebirthing" and "Whispers In The Dark" (which features a killer acoustic solo from guitarist Ben Kasica) are clearly the more interesting as they reduce the edginess of their rock versions to more stripped down approaches.

I hate to say it, but the DVD is a bit of a disappointment. While the disc is clearly advertised as offering three music videos - "Rebirthing," "Whispers In The Dark," "Looking For Angels" - it also mentions "Behind The Scenes" at the end of the list. Unfortunately, this does not include interviews or glimpses of songwriting in the studio, or anything fans probably have never seen before. Instead, "Behind The Scenes" is nothing more than Skillet's music video for "The Older I Get," which also released earlier this year on iTunes, set to clips of the band recording in the studio. It's nothing new, and frankly, a bit misleading. Regardless, it's great to have tangible, widescreen DVD copies of the Comatose music videos for the first time.

If, somehow, a Skillet fan has yet to pick up Comatose, Comatose: Deluxe Edition is without a doubt the obvious choice for getting the most bang for your buck. Still, the lack of attention to detail in track placement, as well as a slightly thin DVD (which would have worked better as a separate acoustic EP with an enhanced portion featuring the DVD content to remove the bonus tracks from the regular studio release, thus retaining its original concept vision), make this Comatose: Deluxe Edition feel less like a solidly constructed release than its original. Whether repurchasing the whole album for these goodies is worth it or not for the Skillet fan is up to them. I just can't help but feel like it's getting to the point where a separate release entirely, serving as a companion EP (see: Project 86's The Kane Mutiny iTunes EP), would make more sense (and be more considerate) for the fans for which these re-releases are targeted for anyway, and who also most likely had preordered the album's first version last year. When all is said and done, it's a rather bittersweet experience.