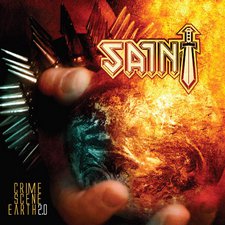 
The career of the Oregon-born band, Saint, can be roughly divided into three distinct periods. The band made its opening bow during the early eighties and filled the better part of that decade churning out a series of classic metal efforts chock-full of churning guitars, soaring vocals and apocalyptically-inspired lyrics. Perhaps understandably, the band sat out the following ten years, as artists who plied their trade in grunge, rap-rock and nu-metal rendered those who favored the previous decade's straight-ahead metal aesthetic all but passé. And the third, and current, era, which began with their reformation in 1999, has found the band mostly picking up where they left off, offering fans a second helping of the music that first inspired them to craft their debut six-song EP back in 1984.

The original Crime Scene Earth album, released in 2008, featured front man Josh Kramer's vocals on only three tracks, while bassist Richard Lynch handled singing the remaining six non-instrumental cuts. For the reissue, Lynch's vocals -- which were nearly universally panned by long-time fans -- were removed and replaced by Kramer's newly-recorded contributions. Likewise, the original production, which was, even to the most gracious ears, both thin and muddy, was given an overhaul to bring it closer to snuff.

While this sort of dual-upgrade approach might look good on paper, it winds up playing out far less impressively in actual practice. Firstly, Kramer delivers his vocals in much the same style as Lynch's original contributions, meaning that any difference between the two is modest, at best, even to the most finicky ears. And although the updated production is admittedly somewhat fuller and clearer, it still falls well shy of current-day standards; sounding, for all intents and purposes, like that of a low-budget demo.

That being said, given the host of shortcomings intrinsic to the 2008 iteration, all such tinkering was arguably an uphill battle from the start. The lack of strong melody or catchy foundational riff causes songs like "The Judas in Me" to spin aimlessly in place without ever grabbing the listener's ear or going anywhere. Even more noticeably, disjointed entries like "Too Many" and "Bended Knee" sound as if Kramer and his cohorts laid down their vocal and instrumental contributions without listening to the other party as they did so. And the screeched chorus of "Half a Times Measure" and the almost Strong Bad-esque growled vocal outro to the title track will likely come across as borderline caricatures of the heavy metal idiom, even to some of the genre's most ardent enthusiasts.

To be fair, the album isn't completely without bright spots. It is telling, though, that the strongest point in the proceedings, by a long shot, comes in the form of the Judas Priest cover, "Invader," whose memorable melody line and rock-solid riffs add together to veritably dwarf the cuts that precede and follow it. Hats off to the band for attempting to spiff up the sonics and for returning Kramer to what many a diehard fan considers his rightful post behind the mic. But even with these external embellishments firmly in place, the sum total of the group's best intentions aren't enough to salvage what is, at its core, one of their weakest and most undistinguished efforts to date.