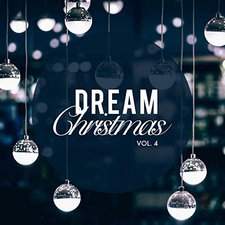 
If one didn't know better, they might assume that the folks at DREAM Records are following some sort of predetermined pattern when it comes to their holiday-themed anthologies. The label's first Christmas compilation featured thirteen tracks by eight different artists. By the time Volume 2 saw the light of day, the composition count was trimmed down to eight, making the sophomore offering more like two thirds of a full-fledged album. The third installment in the series found the DREAM team once again ramping up the total song number to twelve. Which brings us to the present where, this time around, fans are greeted with Christmas Vol. 4, a seven-cut extended player.

Theories about the debatable full/half/full/half-album template aside, the most recent edition in the sequence includes at least a few hands-down winners in its lineup. The ethereal sounds that wash in and out of "Joy" render Switch's shuffling, easy-going version of the holiday classic, "Joy to the World," as light and airy as it is engaging. The simple, heartfelt beauty of HillaryJane's mid-tempo ballad, "Emmanuel (God with Us)," make it the collection's most reverent and moving entry. And the irresistiblly lively "Dancing in a Snow Globe" shows that the men of We Are Leo aren't afraid to channel a bit of late-'70s disco when the song calls for it. To be certain, listeners brave enough to lower the convertible top in the middle of December and cruise the downtown hot spots have now found the perfect accompaniment track.

Unfortunately, the remainder of the Vol. 4 run time is filled out with run of the mill radio-fitted fare that does little to distinguish itself from the veritable throng of artists now shoehorned into the sated pop/worship domain. Of course, listeners whose bread and butter lies within the inspirational Top 40 would do well to pick up the Vol. 4 project, given the fact that, even at its most generic, the EP is still arguably on par with most of what they hear on the radio. For everyone else, though, the best course of action would be to add the first three songs to their Christmas playlist and take a pass on the rest.