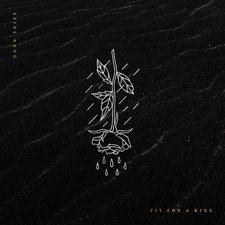 Fit For A King
Dark Skies


Ever since their breakthrough effort, 2013's Creation/Destruction, Fit for a King has become one of the most consistently exceptional acts in heavy music in recent memory. Their ability to balance crushing breakdowns with technical precision and an ear for melody made them stand out in a genre that has, unfortunately, gotten rather stale. Although Fit for a King has yet to truly shake things up (and I know they can), they've managed to perfect their craft and utilize every ounce of potential the metalcore tag has in hand. Both of their prior records saw them developing various aspects of their sound and this latest record is no exception.

Musically, Dark Skies is the tightest batch of songs the band has penned to date. "Engraved" and "The Price of Agony" opens the record with a showcasing of both their heaviest elements and their most melodic but, for the most part, the latter aspect is what Dark Skies chooses to accentuate the most. "When Everything Means Nothing" and "Youth | Division" feature some of the strongest vocal hooks of the band's career, and when the latter changes keys for its final chorus, the outcome is spectacular. Likewise, "Debts of the Soul" is a gentle, slowly building interlude that quickly explodes into an epic finale. As a result of a bigger emphasis on melody, the music itself often leans in a more hard rock direction, which could potentially be a problem for some listeners. But even though Dark Skies takes a slightly softer approach overall, there are still a number of potential fan favorites. "Backbreaker," as its name implies, is a crushing, aggressive anthem that's sure to get the moshpit rolling. "Anthem of the Defeated" sounds like an early cut from Ryan Clark's Training for Utopia, and in the death metal inspired "Shattered Glass," it's easy to mistake Ryan Kirby's low growl with Brook Reeves' signature roar. These are easily among the heaviest tunes Fit for a King has performed to date, and while they aren't the strongest moments on the record for this reviewer, they're undeniably fun nonetheless.

Thematically, Dark Skies fits somewhere between Slave To Nothing's triumphant declaration and Deathgrip's hopeless, death-ravaged setting. There are plenty of moments filled with doubt, despair, and fear, but these heavy themes are sung with the intention of looking up to someone above ourselves. "The Price of Agony" reveals the unnecessary divide we too often create due to differences in political opinion. "Our divide is growing further and further / The hands of time are moving faster / When will we stop paying the price of agony? / Holding on to what we know. / Too proud to change, too scared to grow." The aforementioned "When Everything Means Nothing" attempts to break away the masks we choose to hide behind to tell us that pain and suffering aren't something that we should shun or ignore. We're all walking the same road and no one is suffering alone. "I try to smile, try to fight, just say I'm okay / But everyday feels like a hurricane / Yeah, I was born in the rain." "Oblivion" ends the record on a note of redemption and forgiveness as the singer cries, "The road back to you feels so long with so many battles along the way / I brought all of this on myself and I should accept the blame for everyone I've hurt / Through all my mistakes, you still look down on me / You show me your face in a way I can see.... you forgave me."

Dark Skies may be Fit for a King's fifth studio record, but the energy, passion, and enthusiasm these men have for their craft and ministry has not changed since they entered the scene with Descendents. Despite a couple of minor shortcomings, Dark Skies proves that the band can still hold their own and belt out some earth-shattering tunes while they're at it.