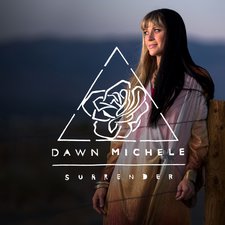 
Dawn Michele, who is best known for her work as the lead singer of the rock band Fireflight, is finally here with her debut solo worship project, titled Surrender. While this release isnt quite as edgy as some of the material she has created with Fireflight, Dawn succeeds in crafting an enjoyable worship album that showcases her strengths beautifully. Musically, its a healthy mix of pop/worship with shades of alt-pop and progressive rock to help her sound stand out from the rest of the crowd.

Kicking off the album is the alternative pop-rocker, Now And Forevermore, a heartfelt worship track that serves as a solid opener. Musically, it sounds like something that would be found on Fireflights record, Innova. Following this up is the poppy We Are Here For You, and the beautiful I Surrender All. The latter features guest vocals from Tim Timmons, which adds an element that balances beautifully with Dawns voice as they sing, Help me to remember / When my hope is sinking / You're the God who walks on crashing seas / Here now I surrender. A standout is the sweeping power ballad God And God Alone, which has potential to work quite well in a church setting: So come in like a crashing wave / Were longing for our hearts to change / Lift us up to see your face / You are God and God Alone. Towards the back half of the record, Dawn performs an enchanting cover of Great I Am, which is a welcome addition to the album. The epic rendition of How Great Thou Art is also a highlight, as her powerful vocals are on full display.

Like most worship albums, this one isnt without its flaws, as certain tracks sound more like fillers compared to others, such as Holy One and the closer, Is He Worthy. The cover of Andrew Peterson's Is He Worthy feels a bit unnecessary, as there are already multiple renditions out there that pack more of a punch. That being said, Dawn delivers for the most part with this worship project, as Surrender is a cohesive record that sounds fresh, and surprisingly doesnt come across as cliche. If you are a fan of the modern worship scene, this release is definitely worth giving a spin, and those who follow her work with Fireflight should find at least a song or two here to enjoy.

Fireflight's Dawn Michele launches her solo career with Surrender, a worship album that aims to do more than just add noise to the overly saturated genre. Through the 10-song project, she makes a valiant effort to stand out, too, as songs like "God and God Alone" and "Great I Am" showcase her powerful vocals through electronic driven pop with praise-filled lyrics. The album's track list mixes a few covers into a mostly original batch of songs. And while the few covers feel at home here (for the most part), I'm curious what a full album of all original material might sound like--especially since it's the new songs here that shine the brightest.

If, like this reviewer, you're feeling especially burned out on the current worship music trends, you just might find some revitalization (in more ways than one) through the intimate yet full sound of Surrender. Although a new Fireflight project is on the horizon, I'm also eager to see where Dawn takes her solo music next. - Review date: 5/25/19, John DiBiase of Jesusfreakhideout.com