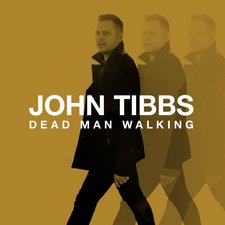 
There is a reason that Classic Rock radio will never really go away. There is a perceived "authenticity" about the early days of rock and roll that, accurate or not, anchors the narrative of the music that came from those years. This is why the sales of classic rock back catalog albums (often repackaged) continue to be a bright spot in the music industry.

Heartland rocker/worship leader John Tibbs captures a good deal of this "true to his roots" vibe in his debut album, Dead Man Walking, one of the best "blue collar" Christian rock albums since the halcyon days of Big Tent Revival and Jennifer Knapp. With a strong theme of identity and honest questioning, Tibbs captures the dichotomy of what it means to be a believer with real vulnerabilities.

The lead track on Dead Man Walking, "Silver In Stone," bursts out of the gate with enough dirt between the notes to suggest its theme is right on; that is, that often times the Lord makes use of the messes that we make, finding the "silver in the stone," the diamond in the rough. With shades of Bruce Springsteen, John Mellencamp and Creedence Clearwater Revival, the heartland rock Tibbs traffics in is just right for the weightier, darker side of the redemption story. Against snarling guitars, Tibbs testifies that the Lord "made your home / in a place unknown / inside these veins / in this muscle and bone / you lead me back from the places I've roamed / you've paid every last dime on the debts that I've grown / but every time it seems impossible that you find / this silver in stone." With complex wordplay and a grand theme (depravity versus grace), "Silver In Stone" is a great song and a powerful opening salvo.

The next track, the epic and driving "Abraham," uses the wandering of its title character's descendants to illustrate that, despite our best efforts as humans, the only thing that gives you peace in this life is the grace of God. With more dense wordplay and an echoing synthesizer, "Abraham" doubles down on the intensity, with Tibbs stressing out his vocal chords, singing "It's not who you are / it's not where you've been / it's not what your hands have built / it's the grace of God that makes this fallen place home."

Things take a down tempo and soulful turn on the title track and first single, with Tibbs and guest vocalist Elle Holcomb singing a down home testimony of God's salvation. Similar to Needtobreathe's "Washed By The Water," "Dead Man Walking" takes a familiar southern music form and breathes life into it.

"Run Wild" amps the intensity back up, with a plea for the Holy Spirit to "run wild in my soul," and "Burn" finds Tibbs worshipfully bellowing "I burn for you" against an aggressive backdrop. "Anchor" takes a bit of a left turn from the classic rock of the first few tracks and drifts into Mumford & Sons territory with a lively banjo and an epic sea shanty vibe (an appropriate use of the genre considering the maritime metaphor of the song). With a harmony vocal assist from folk singer Jillian Edwards, "Anchor" soars and proves to be an album highlight.

"Love Stands Tall" chimes in with an ethereal keyboard line and succeeds with a nice reflection on the tough nature of love--and what it is and isn't. With production that sounds right out of the late 80's, "Love Stands Tall" sounds like a misplaced anthem from Bruce Springsteen's classic album, Tunnel Of Love. "Raining Pouring" is kind of the odd man out on the album, with a slightly pedestrian mid-tempo shuffle, but "Hope" ends things well with the epic refrain, "our story isn't over, because we have a reason to live, we have a promise of home, we have a reason to hope." Tibb's strained, raspy vocals are the perfect complement to a song that compares the present troubles of this life against the backdrop of faith.

Dead Man Walking is an excellent, fully formed, rocking debut album that hits on all cylinders and convicts and encourages in equal measure.