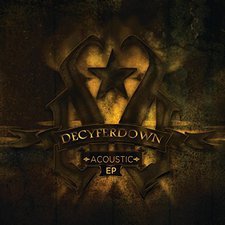 
It's often a waste of an opportunity when a rock band trades their electric instruments for softer ones just to give the song a more intimate feel. Taking a little creative liberty in translating the song to a new format usually makes a more engaging listening experience than hearing the same notes played on a different instrument. Although not the most imaginative of acoustic albums, Decyfer Down's Acoustic EP offers a fresh take on some of the more noteable tracks in the rock band's discography.

This acoustic project was originally a perk on the IndieGoGo campaign of their latest studio album, The Other Side of Darkness, but now, roughly one year later, they are releasing it to the rest of the world. As the straightforward album title suggests, the acoustic guitar is the primary instrument featured here, with a sparse mix of light drums (mostly achieved with brushes) and bass. The acoustic guitars throughout the 21 minute runtime have a full sound with shifts in tone and tempo from track to track, but it's TJ Harris' vocals that are most prominently highlighted in the mix. For the most part Harris shines in the spotlight with versatile and emotive vocals, especially on "Anchor Me" and "Burn Back The Sun."

"Anchor Me" starts off with an aggressive dirty guitar riff before transitioning into a steady pace, making a strong first impression for the EP. For the band's biggest song, "Fading," instead of trying to attain the same epic vibe of the original they opted for a contemplative mood that works well. "Crash" has a similar reworking as "Fading," though perhaps less memorable in execution. The intricate guitar riff on "Crash" has an intriguing world music influence, but Harris' vocals feel a little flat for the first half of the song. "Scarecrow" brings the tempo up with a catchy southern rock riff before the album closes with the beautiful rendition of "Burn Back The Sun." Though "Burn Back The Sun" is more reserved, the weight and emotion behind Harris' vocals is almost tangible as he cries out to God, "bring back the fire once blazing inside this hollow cage." Fans will notice that this is the same acoustic track that appeared on The Other Side of Darkness, but since this recording was originally intended for this acoustic EP it's inclusion here is more than appropriate.

Decyfer Down's Acoustic EP was created as a special treat for fans, and it definitely delivers. There is a lot of attention to detail and enough variation from the originals to make this worthy of many spins. It will probably be most appreciated by longtime and current fans, but if you don't fit into one of those categories at least check out album highlights "Anchor Me" and "Burn Back The Sun."