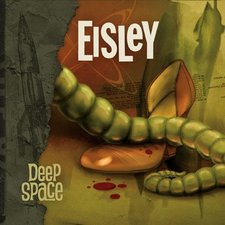 There are some bands that just get it right most of the time. They assemble an album and the listener is left with pondering the excellence that their ears just consumed. This event occurs frequently with the band known as Eisley. However with their latest EP release, Deep Space, I'm not sure if I'm blown away or confused.

The EP opens with the underwhelming "Lights Out." The music sounds muddy and its minor key feel seems to open the album on a negative note. While it is not bad to begin albums with sadness (this was done very well on Eisley's debut full-length) this time around, it seems like the song would have been better placed somewhere else on the album. "Laugh It Off" is a welcoming track on the album with its ambient groovy feel. Just by listening, it seems that Darren King (the drummer of MuteMath and husband of Eisley's Stacy) has had an influence on their sound, which is wonderful.

"Deep Space" keeps the mellow feel but features some excellent vocals from the DuPree sisters. The eerie harmonies and evocative keys give the song real depth and is a real highlight of the EP. However "192 Days" takes the cake for being the best song on the album (it actually previously appeared on the band's 2009 Fire Kite EP in demo form). It's a sweet love song that recaptures the whimsical feel from Room Noises. The vocals and charming lyrics resonate as Sherri sings, "Baby, you're still driving me crazy, I've spent over one hundred and ninety-two days loving you and honestly it doesn't feel more than a day or three." It captures the feelings of the beginning of love very well.

The album concludes with the haunting "One Last Song." Musically, it is reminiscent of something you might hear on a Tim Burton film but with more substance. It's an excellent way to close the curtain and truly proves the point that the ending is what is the most important.

The Deep Space EP is by no means the band's best, but it does show wonderful spurts of their creativity and their new direction. However, it also feels more like a B-sides collection and it's obvious to see why they would be so. Nevertheless, people will still find something special here; it might not blow you away but you'll definitely be pondering about what you just listened to.