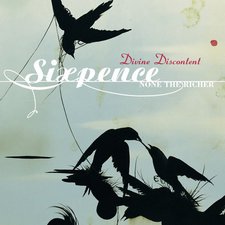 Sixpence None the Richer
Divine Discontent

In 1999, the young yet established Sixpence None The Richer made surprise mainstream success with their single "Kiss Me" which shot them to national stardom. In 2000, the band entered the studio to record their follow-up record and were met with numerous label issues that delayed the project 2 years until this month when the record finally releases to eager and anxious fans. The aptly titled Divine Discontent marks a new chapter in the musical endeavors of the talented group. Fronted by lead vocalist Leigh (Bingham) Nash and musical mastermind Matt Slocum, Sixpence started out in 1993 with a raw sound and artistic approach to music that although excellent, found only a small audience. Their popularity rose over the years before its 1999 explosion, but Sixpence always retained a sound all their own. Divine Discontent almost makes a departure from that sound. While Leigh's vocals have always been inviting and soothing, the overall alternative style of the music had found limited listeners. With Divine, the same deep lyrical exploration is present, but the overall musical direction is shifted to a more accessible pop genre.

Divine Discontent opens with the album's first single "Breathe Your Name," a seemingly typical Sixpence delivery until it meets the electronic drum loop and upbeat pop-soaked chorus. "Tonight," is an upbeat and catchy ode to indecision that begs for radio airplay. "Down and Out of Time," is the first of two Nash-penned tunes, an addictive and somber tune about longing to be needed. "Down and Out..." is a musical and lyrical highlight that fits nicely among the other Slocum musings and proves Nash has learned songwriting from working with the best. "Don't Dream It's Over" is the band's latest cover tune offering, this time of Crowded House's 1987 hit song. Nash's vocals fit beautifully into the song's arrangement as the group successfully revives this tune some 15 years later. "Waiting On the Sun," interestingly enough penned by producer Ron Aniello and Lifehouse frontman Jason Wade. At times, Nash's vocals strike notes Wade would be accustomed to, making this a unique and odd Sixpence offering.

The delicate ballad offerings of "Still Burning," a look at the way that suffering can be a gift as it can steer our lives in the direction to a better state of living, offer a more somber reflection while "Melody of You" is a worshipful ballad in the same vein of more traditional Sixpence songs. "Paralyzed" is the only rock song on the album, a song inspired by the tragic story of a journalist killed in Kosovo in 1999. "I've Been Waiting" contemplates failure in relationships while Nash's "Eyes Wide Open" is an oddly instrumented and jazzy offering inspired by her struggles with her fear of flying. "Dizzy" is a beautiful, piano-driven tune, expressing the desire to be like some of the major Biblical characters, namely King David, the apostle Peter, and the doubtful nature of Thomas. The chorus surrenders, " I give You myself, it's all the I have / Broken and frail, I'm clay in Your hands / And I'm spinning unconcealed / Dizzy on this wheel for You, my love." The string-laden "Tension Is A Passing Note" ponders the difficulty of life on the road as well as how tension can lead to a beautiful resolution. Divine appropriately closes with the highlight "A Million Parachutes," a song written by Slocum, a more organic ballad expressing his painful feelings of loneliness apart from friends one snowy evening.

A solid pop record that might be deemed blasphemous by tried and true Sixpence fans, Divine Discontent offers a lot of lyrically contemplative and accessible pop tunes that should find a home among new listeners but let down those who have been eagerly anticipating new tunes from the Sixpence they know and love.