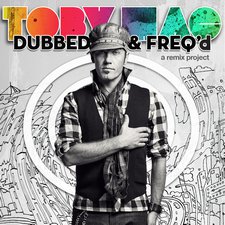 We all know who Tobymac is: one of the original DC Talk fellas who made Christian music cooler than the other side of the pillow. Since then, he has released a slew of solo joints and a perhaps a few too many remix albums. I don't blame the dude for being overly creative, I just wonder how many times an artist can throw in some new beats over the same lyrics and still make good tunes. So how does his third remix effort, Dubbed & Freq'd - A Remix Project, compare to his previous installments?

The remix joint opens with "Made To Love" and "No Ordinary Love" from 2007's Portable Sounds, and you're immediately launched into what you can expect for the entire twelve-track project: a slew of already solid songs laid over new hot beats that keep the head bobbin' all day. Both songs are enjoyable and come out nicely. Later on you'll catch "Lose My Soul" and "Ignition" which are both simply amazing, with the former carrying hot piano (yes piano) keys while the latter has dramatic production throughout. McKeehan takes two already great songs and re-mixes them into pure creative awesomeness. Despite these strengths, not every track chosen from Portable Sounds came out stellar however. "Boomin," which was a good song the first time around, comes out sounding sloppy, landing itself a prime spot on the "skip this song" list.

The other half of the Dubbed & Freq'd release is filled with selected tracks from 2010's Tonight, and it's almost a repeat of the Portable Sounds half. You'll find mostly good tunes remixed well with a small mistep or two. Familiar songs "City On Our Knees," "Hold On," and "Get Back Up" are all worthy of being re-released and make for solid creative tracks. "Start Somewhere" takes the cake on the entire release. The chorus flows with such rapidness, and when blended with the smooth verses it becomes a musical masterpiece...and that's before the ultra creative music flows through the background making this one a perfect listen. However, there are flaws. "Tonight" and "Captured" were simply better left alone in their original state. The remix versions seem like something that were produced somewhere other than a music studio.

Let's be honest; the reason Tobymac is so successful is because he is great at making music that people love and then flipping it into multiple releases that switch things up just enough to make current fans want it and new listeners check it out. His music can be loved by fans of multiple genres and all ages, and this remixe project is no different. This will be enjoyed by most who like his other stuff, and I'd recommend it to anyone who hasn't tried T-Mac out in a while. Even though I'm not typically a huge fan of Tobymac, this will be spinning in my player for a while.