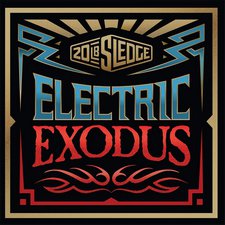 
Most of us are familiar with the decades-old adage that says you can't judge a book by its cover. While this precept is perhaps true in the strictest sense, it is a rare work of literature - or in this case, music - whose outer shell doesn't offer at least a hint regarding its inner contents. This is certainly true of Electric Exodus, the second album from songwriter and multi-instrumentalist - not to mention author, political pundit and trained martial artist - Alfonzo "Zo" Rachel, who is the heart and soul of 20 Lb Sledge.

To be sure, a single glance at the track listing, which includes titles like "Death Buster," "Priests of Chaotica" and "Trauma Sutra," should be enough to lead even those in the less than completely discerning crowd to conclude that Exodus is probably a project chock-full of gritty, drop-tuned guitars, non-stop pummeling rhythms and the sort of bracing, no-holds-barred lyrics that will likely never see the light of day on Christian pop radio. And, to their credit, they would be absolutely correct.

But while a pronounced funk-leaning nu-metal undercurrent undeniably sweeps across the length and breadth of the release, Rachel wisely tosses in elements of several other genres in order to keep his sophomore outing from disintegrating into a repetitive or overly homogenous affair. The opening cut, "Measured in Sky," spices his trademark heavy musical stew with welcome dashes of shuffle, swing and progressive rock. "Trauma Sutra" has an intermittently trippy, and just as engaging, psychedelic vibe. And if there were such a thing as sunshine metal, the buoyant, but insistent, "A Waltz in Gray Minor" would surely stand as a textbook example of it.

To those familiar with Rachel's political commentary, it should come as no surprise that his lyrics are anything but cookie-cutter in nature. "Death Buster" ("I'll take your best shot/ Is death the best you've got") takes the familiar story of the crucifixion and narrates it in language that is both clever and invigorating. "Club Dead Walker" includes a similarly witty portrayal of Christ as "the lost soul shaker, the new life shaper," before punctuating that description with a joyous exhortation to "get your party on!" And the title song's spirited cry of "From Egypt to Eternity, let's blow this joint!" manages to distill the essence of the back 65 books of the Bible into a single succinct, and appropriately exhilarating, exclamation.

In all fairness, the record does show one or two breaches in its otherwise airtight hull. A small handful of the tracks stall in place due to the lack of discernible hooks and/or melody lines that might otherwise propel them more ably along. The relentlessly earthy language employed for "Trauma Sutra"'s unflinching look at date rape and human trafficking are liable to strike some listeners - even in the mainstream-metal-only camp - as offhand and/or over the top. And lines like "I'm a peaceful guy with a poison touch/ To make your bones pour out your butt" and "My splashing hands cause splatty pants/ Now change your ways with your drawers" (both from "XLSSBPB") will rightfully be dismissed as gratuitous juvenile bathroom humor by many a listener who hears them.

All of that said, here in the digital age, trimming the superfluous cuts from the running order is an all but trivial undertaking. And, even at their most coarse, Rachel's compositions always wind up reflecting, and promoting, an unmistakably Biblical worldview. These and its other copious assets notwithstanding, though, Exodus' most potent selling point may well be the way in which its creator unapologetically demands that it be accepted on its own terms, warts and all, as-is. Even with its intermittent shortfalls factored into the equation, the wiser, more discriminating members of the listening audience would be well advised to do just that.