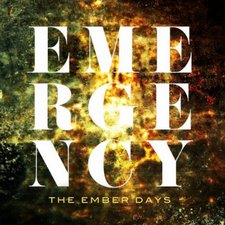 One of the first bands to join the family of Come&Live! artists is the New Zealand-based indie worship band The Ember Days. Their first official Come&Live! release was a re-release of their self-titled EP, with another EP called Finger Painting releasing last August. Finger Painting displayed a hearty maturity in the band's music and artistry. The five songs were written and recorded during the same sessions as their latest album, a full-length called Emergency, which released almost a year to the date after Finger Painting.

It's very clear that the two albums were written at the same time. You could listen to Finger Painting, then immediately turn on Emergency and you wouldn't question it for a second. The albums go hand-in-hand, while at the same time maintaining their own individuality. While the majority of the EP is instrumental, with some lyricism, Emergency is the other way around. There are lots of moments during songs where they almost become a jam band in a sense, and the music just carries them away. But of the ten tracks, only one is completely instrumental (the absolutely gorgeous "Emergency").

The vast majority of Emergency is pretty low-key, with a lot of slower moments. This is pretty typical of The Ember Days, so that shouldn't be too surprising to fans of the band. However, it does feel a little different than previous Ember Days material, like their self-titled. The song structures and some of the rhythms here remind me of labelmates, and close friends of the band, Ascend the Hill. One thing I noticed was that a lot of the songs felt a little dry. Where their previous two EPs were engaging right off the bat, Emergency takes a few listens before it starts to grab the listener. Even then, it's not as great as before. Emergency is still a good album, rest assured, but I don't feel like, musically, it has surpassed its predecessors. You do, however, get lots of well-crafted indie worship that does display a definite talent for songwriting and musicianship.

Fortunately, The Ember Days' music is still drenched in sincerity and humility. Jason Belcher cries out for unity and for God to reveal His love in the opening track "Unite Your Bride," while they simply go to Him in worship in tracks like "All Honor" and "How Great You Are." I love the lyrics in "Run To You" (a redone version of a song from their self-titled EP); it's just a simple song about needing Jesus. As one of my favorite songs from the EP, I was glad to see that they recorded a new version. Though I think I still like the original better, in all its quasi-rawness, it's still a good addition to Emergency. Another redone song is "Yeshua" from their first full-length album, Your Eyes Light Up. The original was just an interlude track with Jason singing "Yeshua, Yeshua." They've taken that and turned it into the chorus for a full song this time around.

The Ember Days are always pleasing to the ears. While I don't feel that Emergency tops Finger Painting, it does get better with each listen, and it's still one of the better worship albums to be released this year. The music is well-written, and the vocals are passionate and dripping with love and heartfelt desire to be closer to Jesus. Not to mention that when Janell Belcher hits those higher notes with her powerful voice, you can just feel the adoration behind what she's singing. Fans of their previous work or indie worship artists like Ascend the Hill or John Mark McMillan will want to give Emergency a listen.