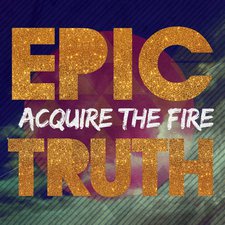 In the interest of full disclosure, I attended Acquire The Fire events when I was a teenager and was greatly influenced by them. I even traveled to China with their mission's arm, Teen Mania. I say this because Acquire The Fire was an "early adapter" of rocking worship music, and has a great history of exposing new songwriters to the masses ("Let The River Flow" by Darrell Evans being a good example of this). This trend continues with Epic Truth, a rocking release of new worship tunes that sounds current and fresh and shows ATF's continued heart for impacting youth with the gospel.

Opener "Everything Must Go" sports an impressive wall of industrial noise and soulful, wailing female vocals a la old school Flyleaf, or even older-school South African CCM vets The Benjamin Gate. As a first wave of music, this tune scores points for energy and passion. Second song (not counting the intro) "God Victorious" is the first worship song I've heard to use auto tune in the vocals. The outcome is not as bad as that pairing might initially sound. Third tune "You Are The Fire" sounds completely different than the first two songs, displaying a mix of U2 and current radio toppers OneRepublic, and adds to the jukebox feel of the collection. Other tunes, like "Enough To Cover Me" have a Bruno Mars, modern radio feel.

And ultimately, ten different kinds of songs under one banner can be interesting, depending on how you view this sort of thing. The variety of sounds is enjoyable, but some listeners may not be quick to accept it. But worship goes far beyond just one style or genre, and there is room for all sorts of sounds.

Epic Truth is a fine effort, filled with interesting songs and good performances, and will surely inspire a young person out there at a critical time in their life.