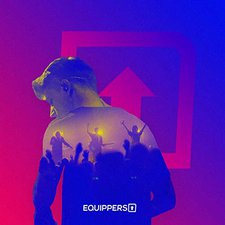 
In what is quickly becoming the de facto standard for new albums, the 12-track self-titled project from the New Zealand-based praise outfit, Equippers Worship, follows on the heels of its EP-based predecessor of the same name, which released in November and contained the first six songs on the current full-length effort. The trio of dance pop-leaning opening cuts, "This Is How We Party," "Hands High" and "Better with You," should find favor with listeners who took a shine to the CLRS EP from Equippers Revolution (who, it should be noted, guest on all but three of the tracks here). It isn't until the fourth song, the beautiful piano-based ballad, "You Won't Let Go," though, that the group turns in the first truly sublime moment of the proceedings.

From there, things take a decided left turn, as the members of Equippers Revolution bow out of the proceedings and the EW cooperative rattle off "I Will Extol," "He Is Holy" and "More to Come" in quick succession. Trading the record's early EDM for a noticeably less bracing groove, these cuts sound, for all the world, as if they were plucked directly from the late '80s/early '90s Hosanna Integrity catalog and inserted into the present project. Of course, there's nothing wrong with such nods to the classic praise tunes of the past, but the tracks, themselves, are laid back to the point of listlessness and generic enough that most listeners would be hard pressed to hum any of them from memory even five minutes after they conclude.

The combined Revolution/Worship collective does right the ship in convincing fashion with the meditative "Heaven Is Here" and "What an Awesome God" before bringing things full circle with the invigoratingly catchy dance cuts, "Promises" and "Senses." In fairness, three of these last four songs also appear, albeit in their studio versions, on the CLRS EP, which, for the uninitiated, would probably be the preferred purchase given the uneven nature of the current self-titled Equippers Worship outing. That said, for those who want to dig a bit deeper into the Equippers catalog, the eponymous EW full-length is easily enough edited down to a fairly impressive seven- or eight-track offering sure to please fans of both the EDM and worship genres.