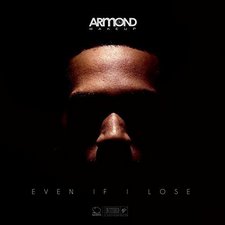 Armond WakeUp
Even If I Lose


Illect Recordings is the home to some really solid underground hip-hop. Most of the artists are Christians, but some of the messages are a little more let's say "crass." While the label is home to some artists that have been around for quite a while, they aren't against bringing in newer talent. One such rapper comes in the way of Armond WakeUp. AWU's newest release, Even If I Lose, is an album that proudly proclaims the name of Jesus, but seriously challenges fellow believers to take a look at their own faith, while inspecting his own flaws at the same time.

The album opens with two songs in one: The first half, "Revelation is Revolution," is a nice start, but the second half, "Even If I Lose, Too," steps it up a bit more. "I Am the Won" picks up the intensity a little as the beat hits a little harder and AWU spits a little more relentlessly. As good as the first couple of tracks are, Armond drops a hard hitting message on "god," which is far and away the album's best. The lyrics are so deep and challenging and points to the gods (little "g") that we make for ourselves. Armond raps, "I need God to be the God of my god complex / I need God to be the difference when I'm not my best / Please, God, be God when I make god of my stress / Even when God is not my yes." He then presses and challenges a little harder with, "Why are we obsessed with celebrities finding Jesus / Why aren't we as enthused for our neighbors across the street / We are we so concerned with who sees us / Seems we focus on the elite more than the meek / Why is God only God twice a week / Hardly in our hearts we'd rather Him at our feet." It's a spot-on look at our society, but may serve as a gut punch for some that are guilty of these exact same things. Finally, he wraps it up with another truthful, but possibly hard to swallow thought, "And it's so easy to speak the truth in a room where everyone believes the same things as you." Armond goes from a song about the Father and the little things we make into gods in our lives to a song about the son, "Jesus." Armond takes a lyrical approach similar to the conversation that Peter had with Jesus when he asked, "Who do you say that I am?" The lyrics tackle everything from calling Jesus a "prophet," "a nice guy," to blaming Him for everything wrong. While the verses examine how the world views Jesus, the chorus proclaims the truth of who Jesus is in actuality. One of the best lines comes with AWU drops, "On the flip, to a degree, their accusations are valid / See, the challenge is building a mansion out of madness / How can a holy temple be filled with some much debauchery, hypocrisy, a doctrine that only belittles God's beliefs?"

"So Help Me God" wraps up the trio of top tracks on the record. It's a track of introspection in which Armond examines some of his flaws and issues, the possible reasons behind them, and prays for God's help in dealing with these problems. It's not as strong as the previous two tracks, but it's another deep and challenging message to sink your teeth into. "How Much More" is a song with a nice piano lead based out of the scriptures found in Matthew 6:26-34. It's a great song about God's love, but doesn't carry near the heft of earlier tracks. "The Weight" is the weakest and least interesting song from a musical standpoint and has a much stronger pop vibe. "Sweeter" takes some of the sounds from the beginning of the album and throws in a little gospel flavor, while "723" mostly serves as a track to wrap things up and prep for what's to come in the future for Armond WakeUp.

Stylistically, Armond WakeUp is a perfect fit for Illect. It's good to see the label adding some fresh talent to the pool. While he's certainly gifted, the best part of Even If I Lose is AWU's unashamed and unabashed faith. Not only does he praise the name of Jesus through his rhymes, but he also challenges the church in the process. All of that still comes with a sense of humility. At no point do you get the message that he thinks that he's better, but instead openly admits to being as flawed as the rest of us. This is a solid album from the Illect Recordings newcomer. Armond WakeUp is definitely a name to be watching for in the future.