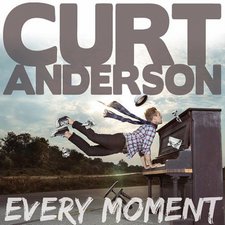 
Curt Anderson has been making music for years, but has now released his label debut under Dream Records. The songs on Every Moment are radio-ready, but unfortunately they don't offer anything noteworthy or memorable.

Serving as the first single, "Keep It Beating" is a piano-driven pop track that praises God for help in every instance of life. The song has a common rhyming sequence, and lyrics like "When I'm lost in the storm, You pull me into your arms, You take my broken heart and keep it beating" can already be found in many other songs on the radio. Musically, the song fares about the same with a predictable beat and crescendo.

The other eleven songs on the record are similarly forgettable, with beats that have been done multiple times by other artists, and lyrics like "To flood creation with Your justice and fill the universe with love" from "Holy" don't cover any new territory or have little depth. While the messages are nice, such as how it is important to live the way God called us to before it's too late ("Love Like You Love") or to trust God no matter how bad the circumstances may be ("When It Hurts"), the unoriginality is hard to overlook. The highlight of the album is KJ-52's contributions to the song "All of Me." Though the rapping sounds out of place on a soft pop album, the emotion comes across more sincerely than any other place on the record.

Mediocrity can be a curse if too many artists attempt to do the same thing, and the more one listens to the same formula, the more glaringly obvious it becomes. By combining lyrics that have been heard time and time again with predictable melodies, Anderson has created an album that is very recognizable and ultimately unremarkable. Those who are looking for deep meanings and artistic songs should look elsewhere.

Diving head first into the crowded genre of Christian pop, Curt Anderson certainly has the potential to attain traction in the industry. His brand of piano-pop is the perfect candidate for Christian radio--it contains highly produced pop melodies with electronic undertones, honest faith-based lyrics (but not so honest that it's uncomfortable), basic rhyming structure and familiar phrases for instant (but often short-lived) memorability. Despite his conventional approach, the majority of Anderson's label debut is quite promising. "Keep It Beating" and "Love Like You Love" are solid cuts that showcase Anderson in his most comfortable state: creating encouraging piano-pop tunes about his relationship with God. These songs are far from groundbreaking, but they are thoughtfully executed. When he steps out of this zone on songs like "Every Moment" and "Lights," which respectively carry an EDM and disco vibe, the effort is commendable, but it feels like he is trying too hard to be trendy. This is most notable on "All Of Me" where Anderson crafted a slower rap/pop song in the same vein as NF's "I'll Keep On" featuring rapped verses from KJ-52, an emotional chorus, and rousing bridge. Anderson knows the recipe for a pop tune that can climb the charts of Christian radio, but an album full of radio hits does not necessarily equate to an artistic musical achievement. Even still, Every Moment is worth checking out, especially for fans of the recent efforts from Building 429 and The Afters. - Review date: 1/9/15, written by Christopher Smith of Jesusfreakhideout.com