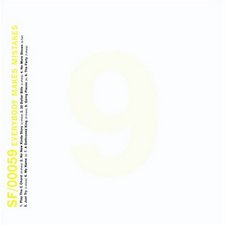 With the ideal of never making two albums that sound the same, Starfyler 59 returned with Everybody Makes Mistakes. While everyone may make mistakes, Jason Martin made very little here.

The album start off with the My Island-esque "Play The C Chord," which is probably the best known song off of the album. Next is "No New Kinda Story;" this excellent song is loaded with keyboards and other sounds filling the background as a single guitar and drums take the lead. When "20 Dollar Bills" starts, it's nothing but Martin and a piano, but soon the song fills with harps, synths and other keys. It's really just a beautiful song all together, but sadly only lasts a little over two minutes. The next track, "No More Shows," is an upbeat, Matchbox Twenty sounding, alt rock track, but sadly, once again, the track barely lasts over the two minute mark, leaving the listener wanting more.

Up next is the mellow "Just Try". While it may be soft, it still offers solid instrumentation and vocals of Martin's higher-range. Though it is an excellent song, it's very unexpected following "No More Shows."

Changing genres once again, Jason and crew unleashed the southern influenced "My Name." With little more than an acoustic guitar and drums on the verses, and two electric guitars on the chorus, "My Name" is very far from sounding empty compared with the keyboards that lace the other songs on the album.

"My Name" gives way to another upbeat, guitar-lead song called "A Dethroned King." This song, while having a slower tempo, still somehow pulls off the label of being upbeat and sounding like it could almost be off the album I Am the Portuguese Blues. Next is "Going Places," sounding like a song that would better fit on an album by Poema or Tal & Acacia. Though not a bad song by any means, it just sounds strange hearing Mr. Martin's vocals over such a light and bubbly sound. Still, it does add a pretty interesting feel that suits Starflyer 59 quite well.

The final song is titled "The Party." This song, despite the name, is not a party at all. It's a very mellow song, but does pretty well at keeping the listener interested and then just leaving them with some peaceful music to listen to until the hidden track comes along (which starts with a saxophone and keys in the background). The hidden track is nothing more than just some beautiful music to listen to, becoming the perfect closer for Everybody Makes Mistakes.

With the length (or lack thereof) of some tracks being the only downside to this album, Everybody Makes Mistakes is definitely an excellent album that every Starflyer fan should have in their collection.