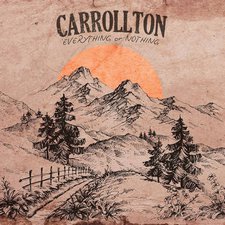 Carrollton
Everything or Nothing


In the past few years, there has been a steady stream of "back to basics" bands and artists entering mainstream CCM. With authentic production ("real" drums instead of programming; loud, dusty guitars and vocals that trend decidedly more "earthy" than pristine, sterile and soaring) bands and artists like Needtobreathe, Zach Williams (who've both scored major hits), John Tibbs and Consumed By Fire have become more and more prominent in Christian music circles with their stripped back appeal and honest songwriting.

Add Kentucky band Carrollton (they're so southern that they took their hometown as their band name) to these ranks. After putting out a number of quality EP's on Centricity Music (and writing one of the best, yet little heard songs of the past few years, "Let Love Win"), the band finally has released a full-length album--and it's full of great southern harmonies and songwriting.

Everything Or Nothing has fairly identifiable and familiar moving parts; a lead singer with a soulful, southern-twinged voice, a guitar-bass-drums lineup and sturdy pop-rock songs aplenty. But there is a certain winning formula here that lifts the album (and past ones) beyond the expected sounds to the level of excellent song craft. For the lack of a better metaphor, Carrollton's songs are like a great hamburger with a knock-out special sauce on top; familiar, but still surprising and satisfying.

The album's first single, "Shelter," builds to a barn-burning, southern gothic chorus, and features another fine set of blue collar lyrics: "In the valley of the shadow / Where my plans turn to dust / When I'm walking through the unknown / In the waiting, I will trust When the sky falls, when the flood comes / Let the rushing waters rise / When my soul is worn and weary / And I've got no place to hide."

The great lyrics and pounding rhythms of the third track, "Stand My Ground," set the table for a conversation about standing up for the right things in this fragile age we live in. Instead of presenting a laundry list of culture war grievances, the band wisely (and Biblically) chooses to look at how the love of God can impact those areas: "If I speak the truth without love / Who will hear me? / If I walk the path without grace / Who will follow me? / And if I move mountains but never show mercy / All I have done will count for nothing / So I will love, love, love / Before I speak my peace / Show them the heart of God / Beating inside of me / It's not too late, all of this hate / Will start to change and turn around / When love is where I choose to stand my ground."

The great tunes don't let up. The Southern Gospel swing of "Giving It All To You" provides a needed downturn from the rugged pace of the beginning of the album. "In Between" is a galloping prayer for the seemingly insignificant moments of life--the ones between the highs and lows of life. "Leaning In" features a great guitar rave up near the end, while "I Will Trust" brings the album to a close in a nice, mellow fashion, with the theme of "the everyday" nicely restated as a prayer for the long haul of life.

Carrollton is a decidedly down-home, blue collar band, and its music and faith shine through with an authenticity that should serve as an example to their peers. With Everything Or Nothing, the band has created a memorable and tuneful slice of Americana that brings to mind the best work of The Eagles, Hootie And The Blowfish and fellow southern rockers Needtobreathe. Everything Or Nothing is highly recommended for a great back roads drive and time of prayer. It's one of the best albums you'll hear this year.