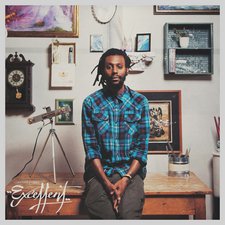 In early 2011, Tunnel Rat and Humble Beast rapper Propaganda released a fantastic spoken word/hip hop album with Odd Thomas called Art Ambidextrous. Though pretty much all of the lyrics struck one chord or another for each listener, there was a small portion that stuck out to me; in the song "Change," Propaganda said "But that's another subject, next album's called Excellent, already started writing, that's a Biblical work ethic." Since then, while soaking in the goodness of Art Ambidextrous, Prop's fans (myself included) eagerly began anticipating this so-called new album, Excellent.

And it's true; Propaganda's new album, again through Humble Beast, is called Excellent. And as much as I try to avoid the obvious pun, "excellent" really is a good word choice to describe the album. To start things off, the production and beats are solid. Art Ambidextrous was produced by Odd Thomas, and Excellent was done by not only Odd Thomas, but Braille and Courtland Urbano as well--otherwise collectively known as Beautiful Eulogy, who already released a phenomenal album a few months ago, called Satellite Kite. If you're a fan of that album, then you should be excited for Excellent, as it's dripping with Beautiful Eulogy production stylings. The title track features a true Courtland Urbano industrial beat, with a mellow, southern sound following in "Redefine Cutter" (complete with a soulful steel guitar). Beautiful Eulogy also makes ample use of acoustic guitar all over Excellent. One of the highlights in production (and all around, really) is "Conquer." The acoustic is used for the duration with a steady beat, an upbeat rhythm and vocal harmonies in the hook. There's also the slower, somber, and contemplative track "Forgive Me For Asking." Beautiful Eulogy's creativity is key to the strength of the beats here. They use a beautiful mixture of organic instrumentation and beats that you don't really hear anywhere else. I have to give props to Prop for this terrific, Humble Beast team up.

When it comes to guest vocalists, we're treated several times to some great spots. My least favorite of these is the appearance of Lee Green in "Redefine Cutter," mainly because he didn't rap in it. He provided some singing in the hook, but Green has an amazing rap voice and flow, and I would've loved hearing him rap on this track. If you remember the interlude track on Art Ambidextrous that featured a coffee shop poet speaking, you may enjoy "Excellent Analogy." That poet, Alphonso McAuley, takes a moment to explain the signifance of excellence in our culture - though in the end, it just ends up being more for comedic purposes (but make sure you have a dictionary handy, just in case). The next track is "Conquer," and it features the one and only Theory Hazit. In short, this is one of the best hip hop tracks I've heard all year. Prop is on fire on his verse, and Theory comes in so calmly but is so real in everything he says, such as "Battle my flesh when it gets in the way, die daily, I commit suicide everyday, killin', that mean He lives in me, I live in Him, He's the conquering King" and "I'm sick and tired of people blaming the devil when we need accountability, growth, and never settle, for your maturity level's like filthy rags, and when He conquers, everybody wave the white flag."

One of the more recognizable names in Christian hip hop is former Reach Records artist Sho Baraka, who teams up with Prop for the emotionally-driven single "I Ain't Got An Answer." The concept of the song is centered around the hardships of parenting, with the added frustrations of today's culture having a more harsh effect on kids and teens today. Sho opens up his heart for his verse and he raps about his son who deals with autism and demonstrates some insecurity about his failures as a father. The last collaboration comes in the second-to-last track, and is a collaboration that is unique and heavy-hitting in both talent and substance. Braille and Odd Thomas spit some rhymes in "Lofty," and in true Beautiful Eulogy fashion, they spend some time in apologetics (or supplying reasonable evidence for the legitimacy of the Christian faith). I especially love some of Odd Thomas' lyrics: "I'm in awe when I think about quantum mechanics and the rotation of planets and the exact calculation of the universe is permanently impossible to manage, how photosynthesis takes place to perfectly convert the vividness of light into chemical energy for the purpose of maintaining and giving life, intelligent design doesn't even begin to define His creative craftsmanship, any attempt to align the mind of mankind to divine is insufficient and inadequate." It's not your everyday style of hip hop, but it's still so impressive and unique. To add to the brilliance of this track, Ascend the Hill vocalist Joel Davis provides the worshipful chorus: "I don't know why, but still I try to wrap my mind around You, Your thoughts are higher, Your ways are better, and I'm in awe, so bring me up to where You are."

The idea behind "Lofty," being worshipful and offering solid reason, is basically the idea behind the whole of Excellent. Propaganda himself doesn't do what would be considered "worship music" in today's Christian culture, but his honesty, humility, and dedication to making the best music he is absolutely capable of is what worship really is. Prop has been working on this album since before his last album even released, and he and Beautiful Eulogy have spent a lot of time making sure that their offering is all that it can be. And from that, we get some awesome hip hop music that is great brain food and glorifying to God.

In addition, Prop is very socially-conscious, with a desire to see people become more aware of the culture and beliefs of others, which oftentimes happens to go against the grain of mainstream thinking and, subsequently, our pride. In the opening track, "Don't Listen To Me," he makes mention of the fact that we still can't explain pyramids, and follows it up with "I know academia is so drunk on arrogance and racism that they'd rather credit these accomplishments to ALIENS than to admit that we are not the smartest civilization to ever live." Later on, the track "Precious Puritans" takes a few minutes to "deal with some in-house issues," or in other words, some Body-of-Christ issues. Some church bodies hold the Puritans in high regards when it comes to theological beliefs and actions, yet Prop makes no bones about being bothered by it as a black man. In reference to the Puritans, Prop says "How come the things the Spirit showed them in the Valley of Vision didn't compel them to knock on their neighbor's door and say 'You can't own people!'? Your precious Puritans were not perfect, you romanticize them as if they were inerrant, as if the skeletons in their closet was pardoned due to their hard work and tobacco growth, as if abolitionists were not racist and just pro-union, as if God only spoke to wite boys with epic beards, you know Jesus didn't really look like them paintings, that was just Michelangelo's boyfriend." His words should really cause people to think again about those days where Christ-professing people were okay with owning slaves. The following track, "Forgive Me For Asking," asks the hard questions and about Christianity as well as Islam and Atheism. Prop also points out some misguidings about the beliefs as outlined in each religion's respective holy book (or lack thereof). They're very touchy subjects that he addresses, but his humility and respect in doing so ends up being very obvious.

When it comes down to it, there's so much depth to Excellent, that I'd have to spend a lot more time writing about it to really get to it all. With that being said, I submit to you that Propaganda's new album is one worth investing some digging time in. While some tracks ("Excellent," "Conquer," "Lofty") hit audibly harder than others ("I Ain't Got An Answer," "Warm Words"), they make up for it with the strong message and the technical aspects, such as production and engineering. In conclusion, Propaganda and Beautiful Eulogy have blown me away yet again. These four like-minded, Christ-loving artists complement each other's skills so well, and it's evident on Excellent. It's free on Humble Beast's website, and it needs to be in your music collection if you're a hip hop fan and/or you'd like to be challenged a bit.

- PReview date: 9/15/12, Review date: 9/21/12, written by Scott Fryberger of Jesusfreakhideout.com class="coversize" align=right> Early Thoughts...
After releasing one of 2011's best hip hop albums, Propaganda (aka Jason Petty) is back with his second Humble Beast effort, the long-awaited Excellent. Featuring production from none other than the Beautiful Eulogy trio, as well as other quality guest spots from Theory Hazit, Sho Baraka, and even Ascend the Hill's Joel Davis, Excellent is a heavy-hitting album. The album is tight in every way; the beats are unique and banging, the sound is clean, and Propaganda brings it like only he can. You'll get to know him in the opener "Don't Listen To Me," feel challenged by "Precious Puritans," and give some praise to Jesus in the hip hop/worship track "Lofty." I'm also a fan of the live closer "Be Present," where Prop humbly tells a story about his shortcomings as a husband that we all can relate to, married or not. If you've been anxious for this album, rest assured it lives up to the hype. As always, it will be free, but don't be afraid to drop some cash on this one if you can. It'll be money well-spent... - PReview date: 9/15/12, written by Scott Fryberger of Jesusfreakhideout.com --->