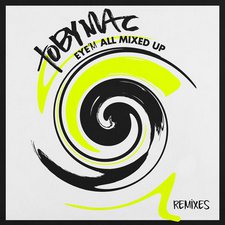 TobyMac
Eye'M All Mixed Up

There is an unwritten rule that each TobyMac album will be followed by a remix project. Though that rule was broken with 2007's Portable Sounds, it was remedied with Dubbed & Freq'd, a remix project which covered both Portable Sounds and its follow-up, Tonight. With Eye On It dropping two years ago, it was only a matter of time before we were presented with Eye'm All Mixed Up. To help him create this album, Toby has enlisted the help of artists such as Capital Kings, Soul Glow Activatur, and Telemitry. Musically, the songs here have been completely re-imagined, effectively transforming the pop sound of Eye On It into EDM (Electronic Dance Music). These new compositions are dominated by drum machines, synthesizers, and bass. All of the songs here are excellently crafted and some of them are even improvements of the originals.

Unfortunately, where Toby loses points is the fact that there are only seven new arrangements on this album. There is a total of 11 tracks, but four of them were recycled from the deluxe edition of Eye On It. Additionally, the songs "Me Without You" and "Eye On It" are both given two treatments, which just feels redundant. However, what this album lacks in the quantity of new material it makes up for in the quality of it. Though there are not any songs that are completely outside of the box like we have seen with previous remixes ("Start Somewhere," "Atmosphere"), these are still fun and creative interpretations.

Both remixes of "Eye On It" are spot-on and an enhancement of the original. Soul Glow Activatur's take has a catchy beat which does a better job highlighting Toby's raps. The Kaveman mix is a dramatic rendition with good builds to a lush electronic post-chorus. In "Unstoppable" the swirling ambiance in the verses leads to a club vibe in the chorus. The huge bass in the chorus might get you some head turns. While this new version is fantastic, it does not remedy the weak lyrics in the chorus: "We are, we are / we are unstoppable / we are, we are / for the impossible / we are, we are / we are the kingdom come / that's who we are, that's who we are." The Thunderbird remix of "Thankful For You" is an album highlight with a musical soundscape that takes you on a journey of flowing synths and dynamic drum loops which are constantly evolving.

"Forgiveness" has big shoes to fill as it was arguably the strongest cut on Eye On It. The steady hip-hop beat is replaced by a reverb-heavy drum loop and atmospheric synths. While this new musical backdrop is rich with sound, the original had a simpler approach which fit the song better. Lyrically, this is still the best song off the album. Toby raps in the first verse, "It's hanging over him like the clouds of Seattle / And rainin' on his swag fallin' deeper in his saddle / It's written on his face, he don't have to speak a sound / Somebody call the five-o, we got a man down." This is a really funny yet effective image of what holding grudges or being wronged can feel like. In the chorus, he proceeds to tell us how much we all need to give and get forgiveness. There is also a well-placed guest appearance from Lecrae who tells us that forgiveness ultimately comes from Jesus.

Capital Kings' "Lose Myself" and Jack Shocklee's "Steal My Show" were both featured on the deluxe edition of Eye On It. They are personal and vulnerable songs about Toby surrendering his life for God's purposes. Both are given a more upbeat treatment than the original, which loses some of the impact of the lyrics, but still end up being a fun listen. On a negative note, not even the hot new beat can save Truett's "Mac Daddy" from sticking out like a sore thumb. He was cute when he was rapping about riding his bike without training wheels, but as a teenager rapping about wanting a Macbook, it is just awkward. The two "Me Without You" remixes are the other two recycled songs. Capital Kings' "Me Without You" may have a monstrous breakdown in the chorus, but otherwise it does little to grab your attention. The song is also dragged out a minute longer than it needs to be. The thumping Telemitry mix fares significantly better with a great rhythm and frenzied electronic sounds in the chorus.

After 27 years of making quality music, it is clear that Toby has a lot of creativity up his sleeves. Since we know what he is capable of, each additional remix project runs a higher risk of looking less like an artistic expression and more like a profit grab. Eye'm All Mixed Up ultimately steers clear of falling into the latter category, but it makes me wonder if a smash-ups album or an acoustic album would have been a more creative project. Either way, if you are a TobyMac fan, you undoubtedly will want to get your hands on this release.