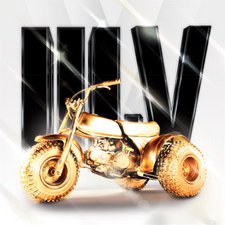 After the mixed reception that the more mainstream-focused III received, Family Force 5 wasted no time in announcing a follow-up EP, aptly titled III.V (in fact, the band announced it the same week that III released). III.V acts as a fine companion to III (and even the original album sampler, III EP), but seems to more adequately represent the band as their original fans have come to know them.

III had taken a decidedly more urban turn with a greater emphasis on girls and partying, seemingly dropping the 'good, clean fun' fans gravitated toward in the beginning. Their sound has morphed quite a bit since the early crunk rock days, as they ventured into more electronic/dance territory on the concept album Dance Or Die, before adopting more of the urban club flavor for the subsequent remix project (especially "Ghostride The Whip") and the following Christmas project. On III.V, they don't stray too far from the urban pop sound, but the EP opening track "Zombie" is a rocker (with a little bit of a Fell Venus vibe) that uses the imagery of the walking dead to symbolize being dead to sin and alive in Christ (a concept Audio Adrenaline made popular in the late 90's with Some Kind of Zombie). It's a catchy song that shamelessly rides the popularity of our culture's morbid fascination with the undead and utilizes the more gritty vocals Solomon "Soul Glow Activatur" Olds introduced on III. The production here is a bit more raw and even muddy at times, however, which desaturates some of the sonic punch that FF5 songs tend to thrive on. But the mix of the delightfully absurd with a spiritual twist, which fans have gravitated toward from the Atlanta quintet, is executed well in "Zombie," giving us that 'serious fun' that was almost completely absent from III.

In the lyrical vein of songs like "Numb," "Earthquake," "Put Ur Hands Up" and "Keep The Party Alive," the second new track, "Cray Button," is an unabashed party anthem that embraces a pure club feel with the aforementioned good, clean fun lyrics about having a good time on the dance floor. Musically, it serves as a bit more of a bridge between the electronic dance sound of Dance Or Die and the more urban base of III, adding a dash of the more poppy feel from "Keep The Party Alive" into the mix as well. To wrap up the EP, the band offers three brand new acoustic versions of previous FF5 fan favorites ("Love Addict," "Kountry Gentleman," "Fever"). These aren't just remixes or the original music with the production and instrumentation stripped back; the guys have reinvisioned these classics as you might hear them during one of their rare acoustic sets on tour, and they sound really good. They're excellent bonuses to pad the two new songs into a five-song EP and well worth the purchase.

With the official iTunes release of the EP, they added a stripped down "Acoustic Remix" of a new song called "Superhero"--a worship ballad that was tacked on to III as part of its digital re-release alongside III.V. It's a great song, but feels completely out of place with the rest of III when played in context (and coming immediately after "Get On Outta Here" doesn't really work). The remix is similar to the live acoustic version Soli recorded as a video released around Easter this year, but is clearly a different recording with crisper production and some added percussion to drive it. It's a nice remix and also a good fit for this EP.

All in all, III.V is more along the lines of what fans had expected III to be and may be a sign that good things are once again on the proverbial horizon from Family Force 5. While the production may hinder the impact of the two new tracks a bit, they're good accompaniments to III and should serve well as substitutes for that album's weaker tracks. These songs probably won't win over any new fans--or win back those who may have lost interest along the way--but it's a good look at the band's future (and past) and hopefully just a prelude to greater things ahead.