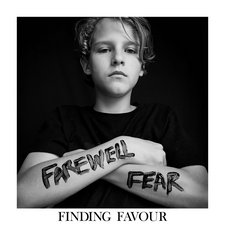 
Expectations often negatively affect our experiences. Be it the third movie in a trilogy or a new release from a beloved artist, expectations are shaped by the past and ultimately create bias in the present. Worship act Finding Favour have made a name for themselves as one of Gotee Record's more uplifting groups that blends pop/rock tendencies with Blake Neesmith's buttery smooth vocals. Though the opening songs of Finding Favour's latest, Farewell Fear, promise an intriguing departure into something groovy, the album quickly devolves into pseudo-inspirational, quasi-worshipful tunes.

The electro-funk of the opening title track sets up a very enjoyable and engaging sound. Simplistic chords, offbeat rhythms and infectious production choices combine with tight synth and bass lines, which continues into the soulful "Get Down." The first 4-and-a-half minutes of this batch of tunes are undoubtedly exciting and catchy, as are "Dance" and "Reprise," which return to the album's initial style. Unfortunately, the next two tracks fall flat and are more indicative of the album as a whole.

"What We Have Is Now" and "Mountains Must Move" feature bland strings, trite lyrical choruses, and the album's ultimate crime of being simply forgettable. The instrumentation attempts to leave creative room for memorable melodies, but both songs have choruses and verses that come across as uninspired. This is particularly disappointing since Neesmith certainly has the vocal chops to provide something fresh.

One could say that the melodies are intentionally direct in order to allow fans and congregants to sing along, but the worshipful vein present in their previous releases is almost entirely absent on Farewell Fear. "Mountains Must Move" does highlight the line "Mountains must move/Waves lay down/In the name of Jesus," but songs like "Completely" and "It Is Well" posture more of a "God is on my side" lyrical approach. This ambiguous sense of adoration is most obscure on "Faithful." The pleasant combination of low piano tones and sustained strings feels like the most worshipful atmosphere on the album, but the song actually depicts the story of their typical listener. The song itself is enjoyable, but lines such as "Faithful in all the little things no one ever sees" and "You're the greatest hero never known" can be misconstrued.

Each song on Farewell Fear contains an element of something likeable, be it the guitar-based bridge of "Happy Ever After" or the vocoder on "Dance," but most of the runtime is notably lackluster. When combined with the stylistic confusion and the absence of worshipful moments, dedicated listeners will likely have to pick and choose individual songs that they find most memorable.