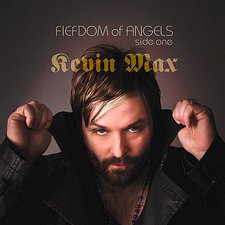 Kevin Max
Fiefdom of Angels: Side One - EP

Since his solo debut, Stereotype Be, over a decade ago, Kevin Max has proven to be nothing short of a genre-bending, enigmatic artist. He's built a cult following over the years, experimented with everything from Euro-pop to synth remixes to indie rock, and explored other media such as film and poetry. So it's no surprise that this multi-skilled artist would take on the world of novels and comics as well. Fiefdom of Angels, a tale envisioning the origin of angels, is a personal project involving both a novel written by Max and a graphic novel collaboration. The concept is intriguing on it's own, but what is a good fantasy without an epic soundtrack to go along with it?

Enter Max's newest musical venture, Fiefdom of Angels: Side 1 (with Side 2 on the way later this summer). This EP takes a brief yet dramatic journey through four cover songs and one Kevin Max original, blending moody orchestral instrumentation and his distinctive voice. It's an intriguing little project to be sure, and turns out to be an enjoyable listen even apart from the supporting story.

The decision to do mostly covers is an interesting and risky one, but considering the mixed song choices on most soundtracks, it makes sense. These songs were hand-picked to coincide with his story, and the artists selected represent some of Max's notable musical influences -- 80s synth bands Real Life and Joy Division, and theatrical British rockers Queen and Muse. After years of hearing their fingerprints on his own musical style, it's fun for the music lover to hear Max pay homage to them like this.

"Send Me An Angel" opens, but it surrenders the original's 80s synth sound for ominous strings and sets up the dark feel of the EP. They thunder deeply then soar over the chorus, with Max's dynamic voice gliding on their power. "End of the Beginning," the only original track, hearkens back to his Stereotype Be days with a strong Eastern vibe, and "Shadowplay" is the perfect fit for his voice, building the record's midpoint to a grand crescendo.

All the high drama doesn't mean there's no room for a little fun. His take on Queen's "Dragon Attack" thankfully doesn't come off like Freddie Mercury karaoke (though Max is one of the few artists that could pull it off). He reinterprets the song with attitude and flourish. "Take a Bow" rounds the EP off on a high note, with layers of vocals rising and lifting the song into the stratosphere.

It's hard to define what sort of replay quality this EP has on its own. The dramatic style makes it a heavy listen for such a short runtime, and since it's a range of mostly covers, it feels a little disjointed sometimes. It will be interesting to see if Side B pulls it all together in the end, maybe with a few more originals. That said, it is a unique, creative project that fans of Max's quirky style, orchestral music, and conceptual projects should probably check it out.