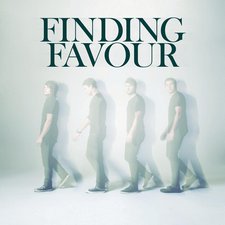 Whenever a new band gets signed, it's always interesting to see what their debut will come out like, and how said band will begin to carve out their career. With recent Gotee signees, Finding Favour, it'll be interesting to see them start their journey. After signing to Gotee Records, the Georgia boys went straight to work in the studio. Aside from working on their debut EP, they recorded a rendition of "Silent Night," which was featured on Gotee's Christmas compilation record back in 2012, giving listeners a taste of their sound. Fast forward to spring 2013, and in synch with their current tour with Building 429, it's also time for their self-titled EP to drop.

For those who have been following Finding Favour, or had a chance to catch their song on the Tis The Season To Be Gotee Too compilation, the sound of this EP comes at no surprise. At its core, Finding Favour is a worship band, mixing pop, CCM and folk styles with a vocalist whose voice brings to mind some tinge of Jason Roy of Building 429 or even a little Bear Rinehart of Needtobreathe. Equipped with traditional CCM lyrics and gang background vocals, Finding Favour bestows their listeners and fans with a six-track EP that includes their debut single "Slip On By" as well.

This eponymous EP opens up with "Shake The World," a foot-tapping ditty decked out with "whoa-oh oh's" and a solid beat, and sings about God's family shaking the world when we go out and spread the Gospel. Next up is "Love Stepped In," and this one is a piano-driven track, which its lyrics go on to love, redemption and God's grace. After that, "Slip On By" is up to bat and, as mentioned above, is also Finding Favour's debut single. It proves to be another catchy tune, but it's a bit slower than its predecessors. Still, it should do well on CCM radio and get a decent amount of airplay. "Hallelujah We Shall Rise" is a straight-up worship song, and continues the slower tempo that "Slip On By" held. "Hero" and "I Am" round out the EP, and "Hero" sings about the everyday heroes that are out there fighting and protecting people, even when the people who are being protected don't realize it. "I Am" closes things out on a positive note, and is being sung from God's perspective, stating that He knows our pain and struggles, and that He is everything we need, and that there is no end to His love for us.

This debut EP from Finding Favour is a modest effort; it's probably not going to be the best debut you hear all year, but it accomplishes its goal fairly well. On Finding Favour, the songs deliver catchy beats and encouraging lyrics with tried and true messages. While Finding Favour delivers a decent EP, it overall feels safe and more "paint-by-numbers" than something that's fresh and creative. Hopefully on their next project they will utilize some more musical and lyrical experimentation, or just do something that distinguishes them from the droves of other CCM related artists. Regardless, fans of the genre will most likely enjoy Finding Favour, but for those who are looking to spice up their playlist, they may have to keep looking.